Liverpool made three early signings this summer but a midfielder was not one of them and in light of numerous injuries, the clamour for one has grown. Jurgen Klopp‘s position has been steadfast, though.

Curtis Jones, Naby Keita and Alex Oxlade-Chamberlain were all absent from the opening day at Fulham and Thiago added to the early woes with a hamstring strain that is to keep him out of action for at least a month.

While Keita is anticipated to be in contention for the visit of Crystal Palace, many feel the midfield is light on numbers and that Liverpool must act before the transfer window closes.

Klopp’s position, though, is one that has seen him defend his midfield and his options throughout the summer, stressing that the club will not make a panic signing.

But what exactly has the manager said on the matter pre and post-Thiago‘s injury?

After Thiago‘s injury at Fulham, Klopp stressed that Liverpool still have enough options and that any transfer would need to make sense for the long-term, not just as a stop-gap:

“We said we don’t need a midfielder because we have enough – and we actually have enough, but the problem now is we get punished for something that is not our responsibility really because things like this can happen.

“Look, a transfer must make sense now and in the long term; we have eight midfielders, we still have enough midfielders. It is not that we lack midfielders, but it’s just that some of them are injured.

“And I know, part of the football business is now getting nervous. We are not. But this is not a good situation, I don’t like it at all.

“We have to see how we react to that – but for sure, not panicking.”

Before the trip to Fulham, Klopp told the press that there were no current plans in the transfer window and, again, pointed out a short-term signing will not be the solution:

“These kind of things are not cool, but we cannot sort a problem we have for four weeks with a transfer for a full year, that makes, in the moment at least, no sense for us.

“But the transfer window is still open and we will see. But the plans don’t go in that direction.”

In an interview with the written press before Liverpool made the trip to Asia, the boss launched a defence against the goals from midfield argument and stressed his current options have many strings to their bows:

“I know all these things, that we ‘don’t score enough goals from midfield’, this and that, but what do we want? This ‘Golden Cow’ that is producing absolutely everything, milk as well!

“We can go through it. Where do you want to start?

“So, Fabinho, Henderson, Thiago, Milner, Keita, Curtis Jones, Harvey Elliott, Fabio Carvalho, Oxlade-Chamberlain. Now you tell me what kind of player are we missing? One who is offensive, 1.95m and arrives into the box to head balls in? OK, apart from that!

“We have three players in the squad who can easily play as a No. 6 – Fabinho, of course, but Hendo and Milly played it fine.

“Creativity? If we bring in a player just for that, we immediately make it more difficult for Harvey, Curtis and Fabio.

“They can all play different positions as well of course, Curtis can play a line higher and Harvey and Fabio can play there too. Fine. We can play a different system as well, where we might only need two midfielders, but then all these guys can play as a No. 10 in the new system.

“So where is the need for a midfielder? I wait for the day when somebody comes to me and tells me why, exactly.” 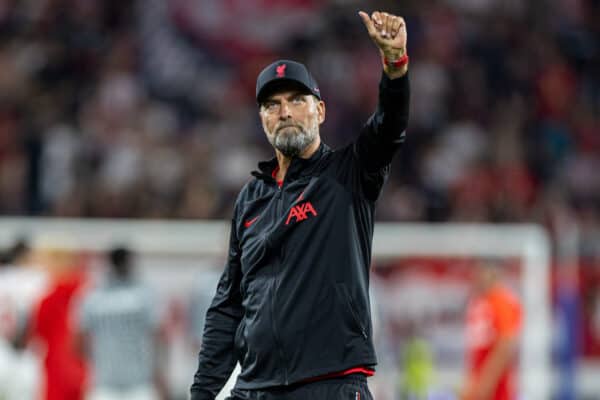 While in Austria, Klopp had a simple message for Liverpool fans, but did note one particular factor that could change matters:

“If nobody wants to leave, we are done. Or if a bad injury comes in…I don’t hope so! Liverpool fans can start focusing on other things.”

You can see Klopp’s stance has not changed too much since July and it is in line with Liverpool’s approach under his tutelage, with the Reds not in the business of having their hand forced.

A new signing would need bedding in and Klopp would expect those out to be back in the mix at the time the player would be up to speed, and you sense that negates his need to look for a solution in the transfer window.

Liverpool are on the hunt for a midfielder but that is expected to come next summer, and as they did with Virgil van Dijk and Naby Keita, they look happy to practice patience.

It won’t be a feeling shared by all, though.