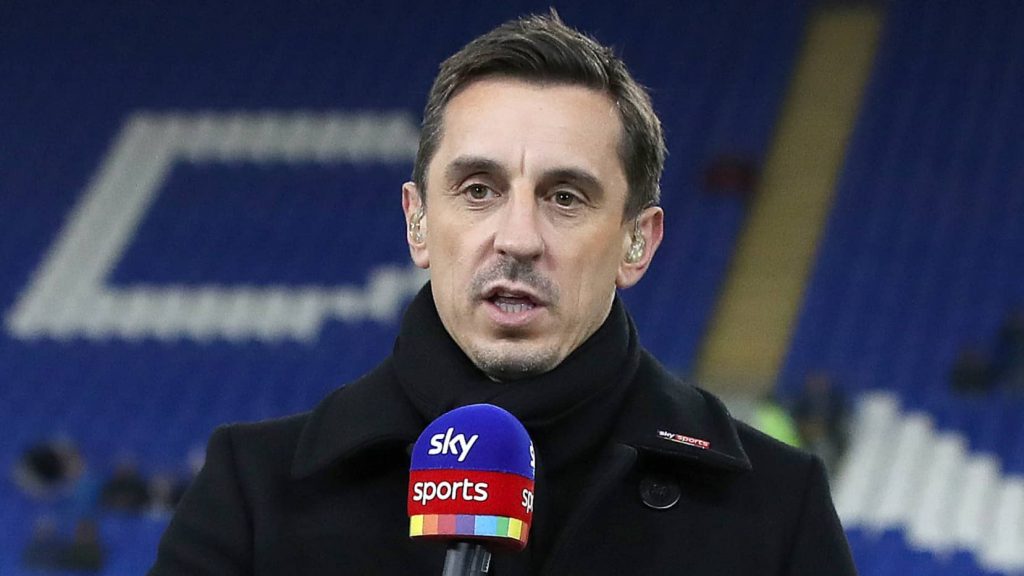 Gary Neville has ranked all of Manchester United’s major signings since Sir Alex Ferguson’s departure in summer 2013, with some surprising findings alongside Jamie Carragher.

On this week’s edition of Monday Night Football before Liverpool drew 1-1 with Crystal Palace, Gary Neville and Jamie Carragher ranked each of Manchester United’s major arrivals in the last nine years.

The pair used a green, amber, and red system to determine which signings have been a success and which are deemed a failure – with the total spend coming to over £1 billion by the club since 2013.

24 of the 32 players were ranked as red, with just two in the green.

Let’s take a look at what the eight-time Premier League winner made of some of United’s red signings during their Old Trafford career.

“What we did see from Marouane last night [in Belgium’s World Cup clash against England] is that he is somebody who can contribute. He’s done that for United.

“There’s always a lot of exposure on Fellaini – people saying ‘he’s not a United midfielder’ – but the reality is he does contribute throughout the season and you need all different types in the dressing room.”

In November 2016, Gary Neville admitted that Juan Mata had proved him wrong about Manchester United after previously questioning the signing from Chelsea in 2014 under David Moyes.

“I myself questioned whether he fits the profile of a Manchester United wide player, because that’s where he is playing, even if I know he ends up drifting in.

“The ability to counter-attack and have wing play has always been Manchester United’s way, so you wondered where he would fit in. I have to say that’s been one of the surprises out of the first few months in Jose Mourinho’s reign.”

Manchester United signed Memphis Depay in summer 2015 and Gary Neville couldn’t have been happier with the arrival from Dutch outfit PSV.

“They do need strength in that area. So what United are buying is potential, obviously someone who has scored goals in the Dutch league, but looking at some of the clips, I think Dutch skilled wingers for me are by far the best at understanding their position.

The season before Manchester United signed Morgan Schneiderlin from Southampton, Neville described the midfielder as ‘the real thing’.

“Schneiderlin, not being disrespectful to Southampton here, I think he could play at any of the top clubs in the league,” Neville told Sky Sports.

“Over a two-three year period now he’s shown himself to be the real thing.”

Following Anthony Martial’s big-money move from Monaco to Manchester United, here’s what Gary Neville had to say after Martial’s first few performances of the 2015/16 season.

“He’s made a big difference. He has transformed the front end of the team.

“I was expecting Manchester United to have signed a winger-forward, but what they have actually signed looks like a number nine; someone who can lead the line, and, if he’s not scoring goals and not running in behind, provide a point for attacks – and I never expected that.

“In the first three weeks he couldn’t have made any greater impact upon me in terms of how he’s settled in, the goals he’s scored, the threat he’s provided, the transformation of the team, but also the fact that he can physically handle himself, push big men out of the way, hold the ball and turn in one movement.”

This was probably fair to say at the time, but didn’t age well.

At the beginning of the 2017/18 season when Manchester United seemed to be winning 4-0 for fun every week, Gary Neville made sure the world knew he was a fan of the Armenian.

“He connects the team. He provides pace on the counter-attack. Manchester United have always been able to get to box to box quickly, and he provides that. He is deceptively quick. I like him in there.

Mkhitaryan scored a crucial goal in the Europa League final against Ajax that helped Manchester United win the trophy and was a star man throughout the campaign.

Aaron Wan-Bissaka has been frozen out of the Manchester United squad in recent times and replaced by Diogo Dalot, but Neville was a huge fan of the full-back in seasons past.

“I’ve seen [Branislav] Ivanovic, [César] Azpilicueta be successful in the Premier League [for Chelsea] over the past five, 10 years and they have been very different full-backs to the ones I’ve mentioned. My view with Aaron Wan-Bissaka is that he should focus on his defending and become a brilliant Manchester United full-back who [helps] keep clean sheets.”

Does the addition of Harry Kane to this Manchester United side guarantee a Premier League title despite Manchester City and Liverpool steamrolling the league in recent years?