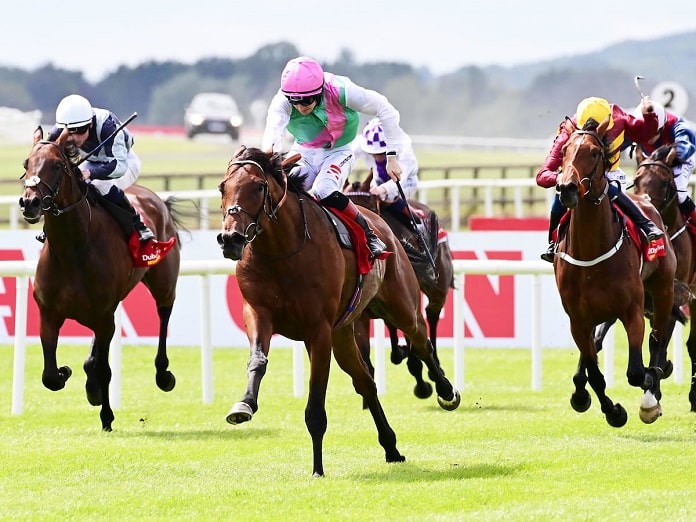 Despite a small field for the headline race of King George weekend, the betting has been shaken up by recent events. A setback last week for Epsom Derby winner Desert Crown ruled him out of taking on his elders for the first time here.

Although Sir Michael Stoute’s new stable star is a notable absentee, there’s also an initially unintended runner added into the mix. That is none other than Emily Upjohn, an unlucky runner-up in the Epsom Oaks who saw her flight to the Emerald Isle for the Irish Oaks cancelled on Friday.

Despite an enforced change of target, we still have the Classic generation represented. Joining Emily Upjohn among remaining runners for the King George 2022 is Irish Derby hero Westover. Ralph Beckett’s charge heads the betting for this contest. Here, SportsLens experts look all six still in the running.

RELATED: Get the lowdown on Ascot races today in our complete course guide.

Pros: Comes to Ascot off the back of a facile Irish Derby victory last time out. Still unexposed at this trip after just outings over a mile-and-a-half.

Cons: Colin Keane is in the saddle again but seldom rides at Ascot. Westover isn’t guaranteed to get a strong pace here in what could be a tactical race. Stamina, rather than a turn of foot, looks his greatest asset. The Irish Derby form took a knock, meanwhile, when runner-up Piz Badile trailed in last for the Grand Prix de Paris.

Pros: Least exposed runner in the field after just the four career starts. More to come as well over this distance after stepping up to it and almost landing a Classic last time out. Emily Upjohn gets weight all-round, and a whole stone from the older horses, for a yard with five wins in the race since 2011.

Cons: This was not the plan. Gosden senior said he respected both the big name three-year-old colts, but Desert Crown’s loss could be a gain for Emily Upjohn. Regular jockey Frankie Dettori freely admitted this year’s Royal Ascot was his worst in 30+ years. He needs to ride the track better here.

Pros: An unlucky loser of the Coral-Eclipse, the summertime feature of Sandown Park races when last in action, Mishriff is a globetrotter who tops official ratings among runners for the King George 2022 this year. He’s also 1-2 at the trip and was staying on close home last time out.

Cons: Mishriff is best over a mile-and-a-quarter. He failed to give weight for age in this race to Adayar when runner-up here 12 months ago. The Gosdens also don’t have a jockey for Mishriff either with Dettori on Emily Upjohn and David Egan ending his retained rider arrangement with owner Prince Faisal.

Pros: Any horse who won the Prix de l’Arc de Triomphe, Europe’s richest race, even as a rank outsider on top betting sites, commands respect. Torquato Tasso is a strong stayer like Westover at this trip and clearly the best horse in training in Germany right now.

Cons: Although he’s won with good in the going description, this is set to be the firmest ground this horse has ever encountered. There is also the fact that Torquator Tasso has finished second on his third start after a break on three occasions. Neither his trainer or jockey are regulars at Ascot either.

Pros: A previous course and distance winner, Pyledriver has often come on for his first run after a break. He has often belied market expectations on horse racing betting sites and landed races as an underdog at double figure odds.

Cons: PJ McDonald has ridden Pyledriver before, but is a remote third-choice for the job. Regular jockey Martin Dwyer sits the season out with a serious injury, while Dettori must ride for his stable. The plucky Pyledriver brings form to the table that simply isn’t as strong as the competition.

Pros: Another previous course and distance victor, Broome landed the Hardwicke Stakes at the royal meeting last time out. On his day, this Irish raider in Japanese part-ownership with “the lads” of Coolmore, is very good on his day.

Cons: This year’s Hardwicke was nothing like as strong as last season. Broome was only fourth and way behind Mishriff in this race 12 months ago. He’s the most exposed of the runners in the King George 2022 and clearly vulnerable to younger, improving horses.

What Time Is The 2022 King George VI And Queen Elizabeth Stakes?

Now you know all about the runners for the King George 2022, here are some of the key stats and trends to follow: