Jurgen Klopp has moulded his off-field staff as carefully as he has with those on it and a familiar face you may see in training has now been promoted ahead of the new season.

Liverpool’s fitness staff continues to grow and change, with maintaining and managing the players’ fitness pivotal during a long and taxing season.

There are added variables in 2022/23 thanks to the World Cup in Qatar taking place during the domestic season, which in Klopp’s words will see some “play the longest season ever.”

It was confirmed earlier this month that Liverpool had appointed Frigyes Vanden Auweele as the new head of osteopathy, while Dr Andreas Schlumberger was handed new responsibilities.

Those new responsibilities have seen Schlumberger assume the role as head of medicine and fitness, a change from his previous title as head of recovery and performance.

Schlumberger took up his initial position in 2020, a newly-created role that came as a shake-up of the medical team and saw him reunite with Klopp after four years together at Borussia Dortmund. 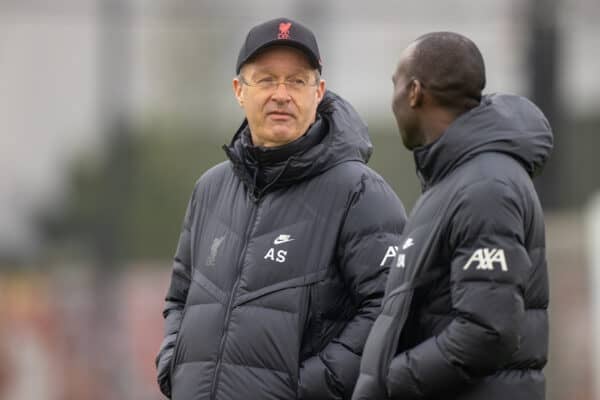 The pair are readily spotted together during training sessions at Kirkby as he oversees the squad and their training loads, with injury prevention and rehabilitation at the forefront of his role.

Schlumberger’s new responsibilities see him take charge of both the performance and medical departments from this season on as the Reds continue to seek an edge in all they do, on and off the field.

He forms part of an impressive off-field team that includes head of fitness and conditioning Andreas Kornmayer, head of nutrition Mona Nemmer and new addition Vanden Auweele, head of osteopathy – a role the Training Ground Guru believes Liverpool are the only club in the country to have.

Schlumberger’s expertise in the field prior to joining Liverpool was moulded during spells with Bayern Munich, Dortmund, Borussia Monchengladbach, FC Nurnberg and Schalke.