Liverpool have handed opportunities to a handful of youngsters so far this pre-season including goalkeeper Harvey Davies, who has now penned a new contract extension with the club.

For those that keep a close eye on first-team training and the academy, Davies would not have been an unfamiliar face when named in the travelling squad to Asia and Austria.

The 18-year-old has been a regular in senior training with the goalkeeper contingent and has been named in a matchday squad by Jurgen Klopp on four different occasions over the last two seasons.

His first minutes in the senior side came against Crystal Palace in Singapore and was then swiftly followed with an appearance at RB Leipzig on Friday.

“It’s right up there, definitely at the top. It’s an incredibly proud moment and I’ll never forget this,” Davies said after the win over Palace.

Davies’ distribution and composure caught the eye on both occasions and he has now added to the feel-good factor of the last few weeks by signing a new contract with the club. 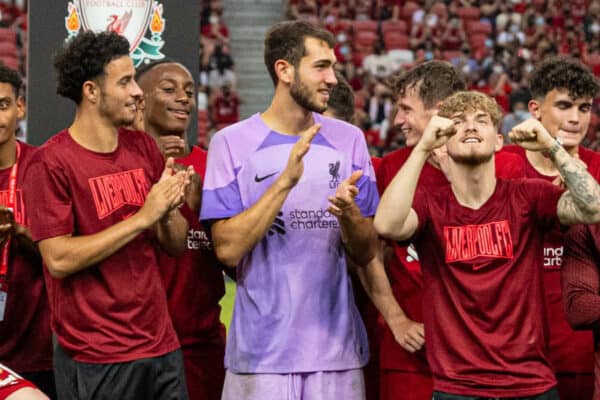 He has been with Liverpool since the under-9s level and has steadily risen through the ranks and it led to his place in the England under-19s squad that won the Euros this summer.

The teenager nows looks to serve as the fourth-choice goalkeeper behind Alisson, Caoimhin Kelleher and Adrian following Marcelo Pitaluga‘s loan to Macclesfield.

It is another valuable step in his development which will continue under coaches John Achterberg, Jack Robinson and Claudio Taffarel and is to coincide with minutes for the U23s this coming season.

And progress is his focus for the remainder of the summer and into the season ahead as he continues to benefit from the injury absence of Alisson and Kelleher.

“[The aim is] to keep cracking on, keep making the next steps – I made a step tonight – and pretty much just keep going up and trying not to slow down,” Davies said while in Asia.

“[I want to] just keep making the same progress as I can.”