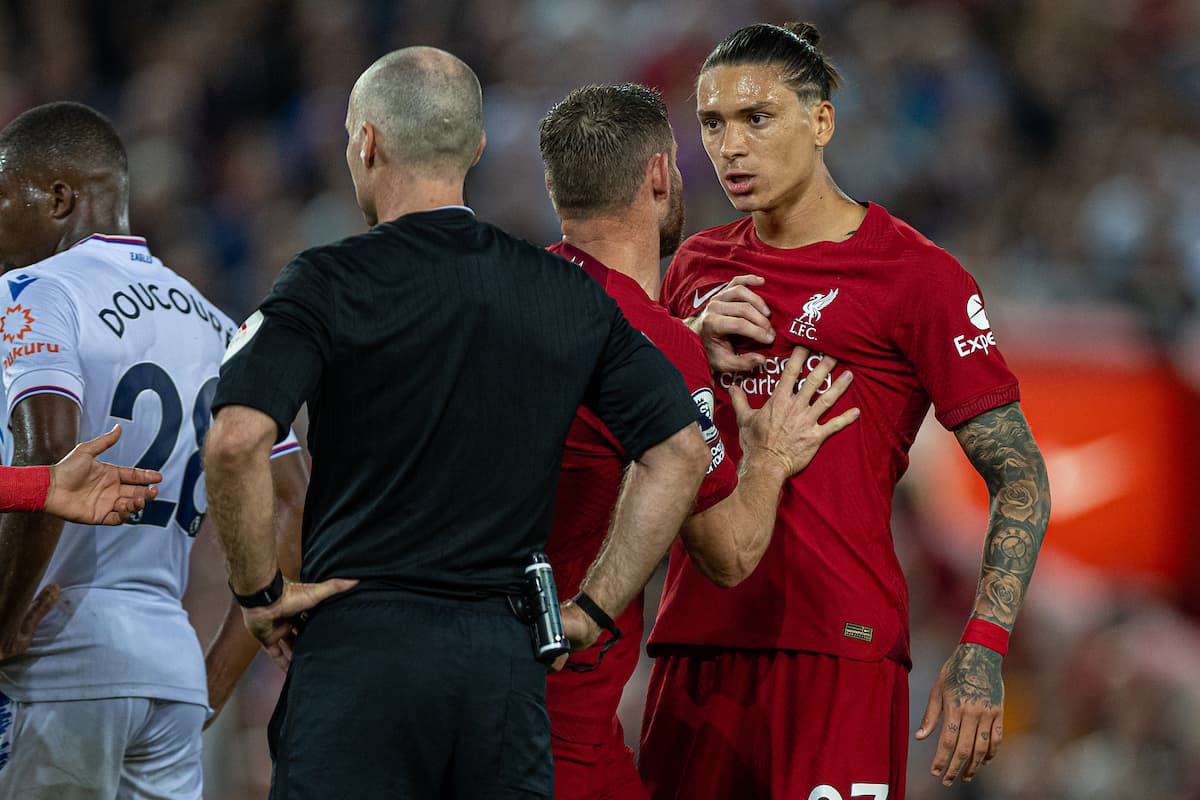 You know those moments where you just want to pretend it never happened, well Darwin Nunez lashing out with a headbutt and receiving a red card is right up there.

Frustration was boiling over, the Reds were chasing a goal and Crystal Palace was doing all they could to break up play and force mistakes and reactions.

It worked as Nunez took the bait, reacting to Joachim Andersen’s shove with a headbutt that defied belief and saw him shown a straight red card. A three-game suspension now awaits.

The Reds reacted the best they could, Luis Diaz scoring a cracking goal to rescue a point but Nunez’s moment of seeing red cast a shadow over Monday’s game and the one to come in a week’s time.

Liverpool travels to Man United next Monday but with Nunez suspended and Diogo Jota injured, Jurgen Klopp will be sweating over Roberto Firmino‘s fitness after he was left out against Palace as a precaution.

The moment of madness and what is to come was quickly on the mind of Liverpool fans.

I cannot believe that. Complete stupidity from Darwin Nunez.

Just absolutely no excuse for that. What is he doing?

Utter stupidity. Can we not have a Uruguay forward who doesn’t do stupid shit?!

What a fucking idiot, three major chances missed and then that, questionable decision making.

We have no centre-forward for the United game ?

Serious one though, who is playing in the CF role at Old Trafford?

1 – Darwin Núñez is the second Liverpool player to be sent off on his first Premier League appearance at Anfield after Joe Cole vs Arsenal in 2010, also on August 15th. Mist. #LIVCRY pic.twitter.com/pDF2Ahvks7

Its annoying that Nunez is now going to be suspended for the game against United. If there’s one team you want a big centre forward to play against, it’s Utd with their 5ft8 centreback!

Not sure what to say on Nunez. Can’t be reacting like that, after a few niggles. The better way to get even is to prove yourself on the pitch.

United away next. No Jota, no Bobby perhaps, no Nunez. Who on earth is going to play alongside Mo? The perfect storm has hit Liverpool…again. No Thiago, forward line decimated, and centre-halves dropping like flies. And still we won’t fill out our squad.

The off-ball incident puts Liverpool in a difficult spot at a time when the injury list is growing seemingly every day, with Nunez to now miss Man United, Bournemouth and Newcastle.

The hope will be that Firmino is fit to start at Old Trafford but if not, the likely move is to start Mohamed Salah in the central role, perhaps leaving the right-wing for Harvey Elliott.

It’s more conundrums for Klopp to face so early in the season and Liverpool now just have to find a way to win while they wait for those on the sidelines to return.