Liverpool have started the 2022/23 season with successive draws after having to come from behind again against Crystal Palace, with Darwin Nunez shown a straight red card. 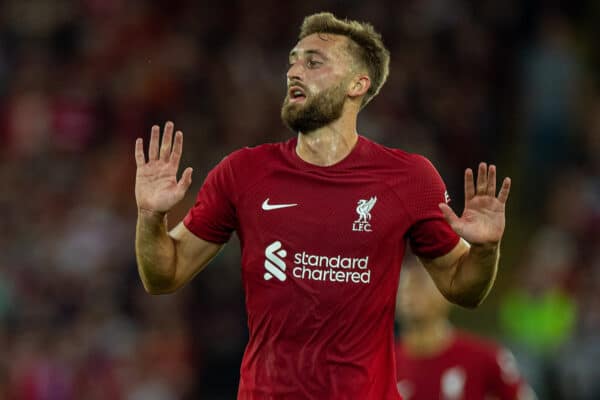 James Milner into midfield, Harvey Elliott getting the nod because there were no other attacking midfield options, Nat Phillips called upon and teenager Fabio Carvalho the only even vaguely-termed forward to be fit for the bench.

Bit early for an injury crisis, isn’t it?!

Add in a third-choice goalkeeper on the bench, Bobby Firmino left out entirely and Joe Gomez only fit enough for sub after a knock, and the mounting absences are quickly making themselves a concern at the start of the 22/23 campaign.

Some will return quickly, of course. Naby Keita‘s return to the squad was well-timed and Kostas Tsimikas was also back, but that didn’t stop fans going into a predictable – and at least partly justified – meltdown pre-game.

Van den Berg, Bajcetic and Clark on the bench – are we sure this isn’t still pre-season?!

Much better start but another game behind 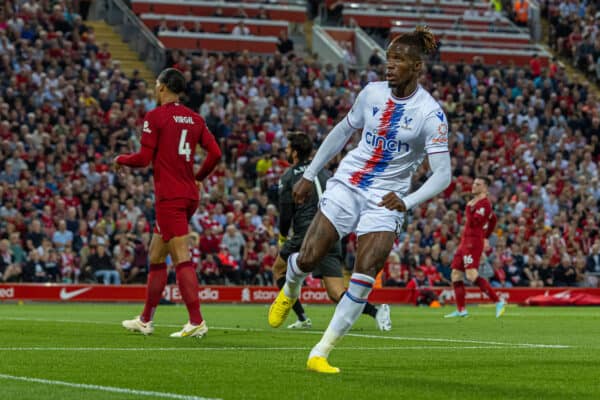 A minute on the clock and James Milner burst into the box, beat a man with a touch and rifled a shot over. It was, let’s be honest, much more brute force than anything else and never finding the net – but it was also as welcome a sight as could be after the ineptitude and sluggishness of the game at Craven Cottage.

It wasn’t much longer before the first challenges went in, the first aggressive presses and the quick pressure being kept on the Palace backline.

Fans would have been feeling on rather more familiar territory, with that dominance and attacking intent – but another familiar feeling was soon to arise, far less welcome.

Zaha ran clear, Zaha scored. That’s both games this term Liverpool have fallen behind in, and in each of the last six league games. Eight in 10 in all competitions.

Yes, Liverpool came back once more. But already it has proven costly this season and there needs to be a better balance one way or another: defend infrequent counters more sternly, or make more use of the attacking pressure created to actually set teams needing to chase the game themselves. 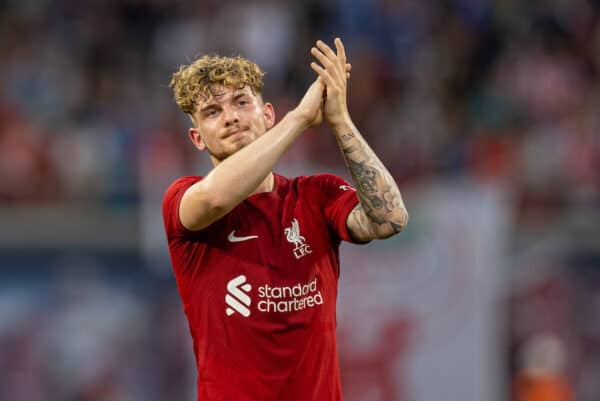 Like last time out, the centre of the park performance was very much intertwined with the tempo of the overall team approach.

Harvey Elliott was the most noticeable personnel change, only his second league start since September last year.

The youngster was excellent with the Reds dominant in the first half, overlapping with regularity, creating himself a couple of shooting chances and doing lots of defensive work to nip in and win the ball, play it back to the recyclers and start our dominance all over again.

Given the form at the start of the season from the captain, the unavailability of the likes of Thiago, Jones, Oxlade-Chamberlain and others and Elliott’s own attacking instincts – and several forwards out – he’s got to have done enough to be a starter again next time out.

It was supposed to be Darwin’s day, his home debut and an expectant Anfield crowd after his big impact off the bench at Fulham.

Fair to say it didn’t quite go to plan though, as Nunez missed a couple of early chances and then was shown a straight red before the hour mark, a stupid reaction seeing him throw out a headbutt in reaction to being pushed. Idiocy of it aside, it’s very, very not what this team has been about under Klopp when needing a big reaction to frustrating moments.

He’ll need to learn that immediately.

While Darwin had been the focus, Luis Diaz had been a little overshadowed this season, it’s fair to say.

Good time to serve a reminder of his outrageous talents, then: he suddenly became the focal point of build-up play and took it upon himself to take on half the entire Palace team.

Dribbling left to right he beat five and rocketed a finish past Guaita – all square and the Reds back on the front foot, despite being a man down.

His tracking back thereafter, as energy levels must have been severely depleted, was excellent. 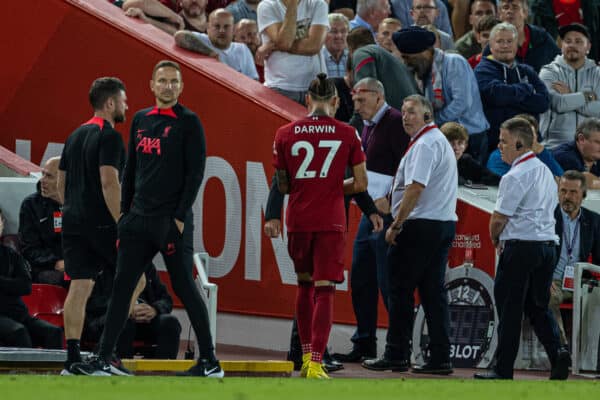 As bad as the start of the season has been in terms of results – the first time we’ve not won one of the opening two games since 2012 – there’s always someone worse. Usually it’s Everton. Technically it’s still them this year too, but it’s also Man United.

Next up, of course, is another Monday night game against that very side.

It’s easy to suggest we should wipe the floor with them, considering how bad they have been so far – and we should – but there are definite areas Liverpool must improve, and immediately.

There’s simply no more scope for slipping up at such an early stage, unless the Reds suddenly want to be drawn into that old battle of being top four, rather than title challengers.

This was a poor night at Anfield because of a single goal conceded and a red card, while the performance was otherwise “OK” for the most part. Draws are damaging for the very best sides, and it’s two too many already against teams who should be beaten.