Jurgen Klopp says “there is no recipe” when it comes to developing players but his excitement at what it is to come for this Liverpool squad is clear.

Speaking after the Reds’ Community Shield win on Saturday, a win that meant the boss has now won every domestic piece of silverware at Liverpool, Klopp was visibly enthused when discussing his new signings.

The boss, who signed a contract extension in April, looks refreshed and happy after the summer’s break, especially given the toll of last season.

It was the perfect start to competitive action for Darwin Nunez, the club’s record signing, winning a penalty and scoring his first goal in an impressive half-hour cameo from the bench.

Speaking to Norwegian pundit Jan Age Fjortoft post-match, Klopp was visibly happy and excited for this next evolution of his squad.

“There is no recipe,” Klopp said when asked what his ‘recipe’ is for making players better.

“The only thing that we try and I think is our duty to do is in the moment they join our club, we share that responsibility for their time here exactly 50-50. So if it’s not working out it’s my fault – at least 50 percent. 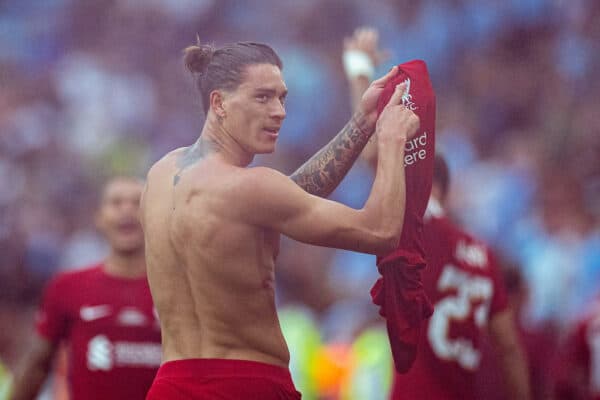 “The way we play obviously helps, we defend together. That makes it easier to win the ball back in these moments.

“One of the most important ingredients for the non-existent recipe is the quality of the players, because we don’t work with people who started playing football yesterday. They are really good, they had a career before us, we scout them, we see them, we see their potential.”

That potential was the reason for adding 19-year-old Fabio Carvalho this summer, and Klopp is clearly enthused about his huge potential:

“Together, we – the coaches team – we try to help them to make the next step. Darwin was really obvious but Fabio… the boy is… honestly, really, really good!

“And we can’t wait to work with Calvin [Ramsay]. He couldn’t train with us yet but he already has a nickname, Rambo! I’m really excited about it.

“And our other boys who are very young and can now make the next step; like Curtis, like Harvey. It’s interesting to watch that.”