Liverpool were far from their best and Fulham made them pay for that on the opening day, eventually sharing the spoils in a 2-2 draw.

There was just one change to the team that started the Community Shield a week ago, with Alisson returning from injury. Roberto Firmino remained up front ahead of Darwin Nunez.

For the fourth consecutive season, the opening game saw Liverpool up against the champions of the Championship. Liverpool had won all the previous three, scoring at least three goals in each.

However, Fulham proved a far more difficult opponent than you may have expected, and Liverpool were far from at the races in the first half.

The home side created chances and eventually they got a deserved lead when Aleksandar Mitrovic headed in at the far post just after the half-hour. 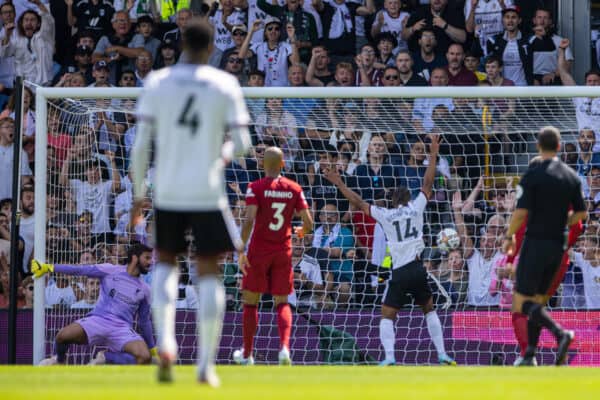 Liverpool weren’t winning challenges and far too many passes were sloppy. Salah was barely in the game.

The closest the Reds came to an equaliser was when Luis Diaz, by far the liveliest player, smashed an effort against the crossbar five minutes before half time.

Fulham deserved their lead at the break, while Liverpool needed to improve in all aspects.

The second half started with more bad news, Thiago limping off with a hamstring injury to make it four centre-midfielders sidelined.

It was almost 2-0 for the home side soon after, Liverpool caught on the ball several times, Nunez caught napping and Fulham smashing the post.

Fulham were completely up for the challenge, winning 50-50s and second balls, while Liverpool were ponderous and sloppy on the ball.

That, though, changed in the 64th minute, Salah sliding the ball across goal for Nunez and the Uruguayan providing a sensational flicked finish to level the scores. 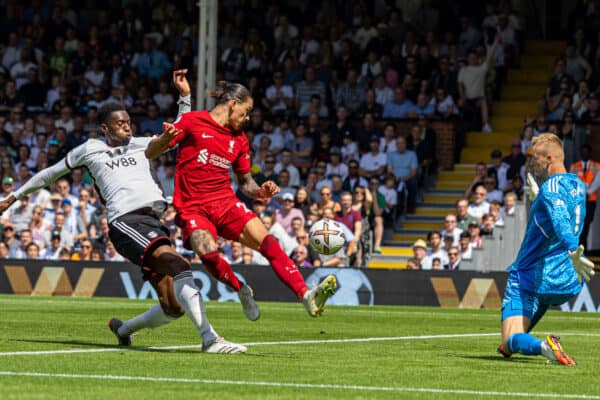 The Reds’ new No.27 almost had a second a couple of minutes later, causing chaos inside the box and his poked shot being cleared off the line. Then Nunez headed down for Diaz but his shot was blocked.

Alas, a debatable call from referee Andy Madley completely flipped the game on its head when he awarded a penalty for a foul by Van Dijk on Mitrovic and the Fulham forward tucked away the resulting spot kick.

Liverpool were back level with 10 minutes to go, Nunez’s mis-control landing perfectly for Salah to finish. 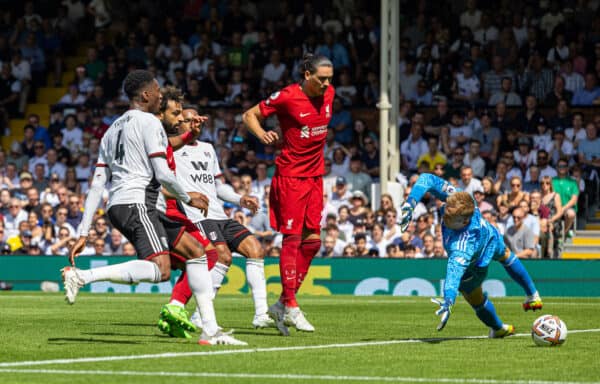 With the Reds back level, a late winner was needed – it almost arrived in the final minute of stoppage time, a Henderson curled effort from 20 yards striking the cross bar.

The first time Liverpool have dropped points on the opening game of the season since 2017.

TIA Man of the Match: Darwin Nunez – off the bench, goal and assist, gave a threat up front that was missing.