Darwin Nunez has admitted to feeling the pressure and nerves after joining Liverpool but has credited Mo Salah for helping him feel comfortable in his new surroundings.

The Uruguayan arrived in the summer with the weight of, outside, expectations thanks to the initial £64 million deal, with a further £21.3 million in add-ons.

Jurgen Klopp acknowledged the striker is “different to what we had before” and when you add in the language barrier plus the time needed to adjust, there is plenty to navigate.

Nunez felt the brunt of how mind-boggling social media can be after just a week at Liverpool, but has since scored five pre-season goals and acted as a game-changer in the Community Shield triumph.

And it was after the win in Leicester that the 23-year-old spoke of how nervous he was at the start of pre-season, to which he credited Salah for offering his help in a welcome chat between the pair.

“To be honest, the first weeks I was extremely nervous, so much that I was missing even the simplest pass,” Nunez told Sports Center, as translated by Twitter user @iMiguelLFC. 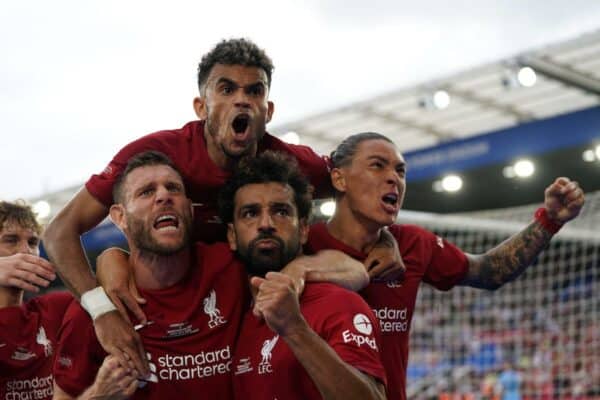 “It was really difficult to get used at the beginning with the team. But as time went by, they made me feel comfortable, I had a talk with Salah that helped me a lot.

“Then with the Brazilians, with Luis Diaz who’s also a new guy here. It’s really difficult to come to a big club like Liverpool and not to feel that pressure. And I felt that.

“[Klopp] has talked a lot with me, he’s always pushing me forward and has given me the trust and I aim to pay that trust back on pitch.”

It is refreshing honesty from Nunez, who was handed another welcome confidence boost in the Community Shield and certainly has the support of the fans and his teammates behind him.

It’s a sad day for the ‘Salah is selfish’ believers.

“You could see in his face, you could see in the face of all his teammates how happy the boys are for him and that’s a really good sign after that short period of time that he is with us,” Klopp said of his goal against Man City.

It’s not unusual for new signings to need an extended time to settle in and patience is the key for Nunez, who will not be expected to start at Fulham but has plenty to offer in the early stages of the season.