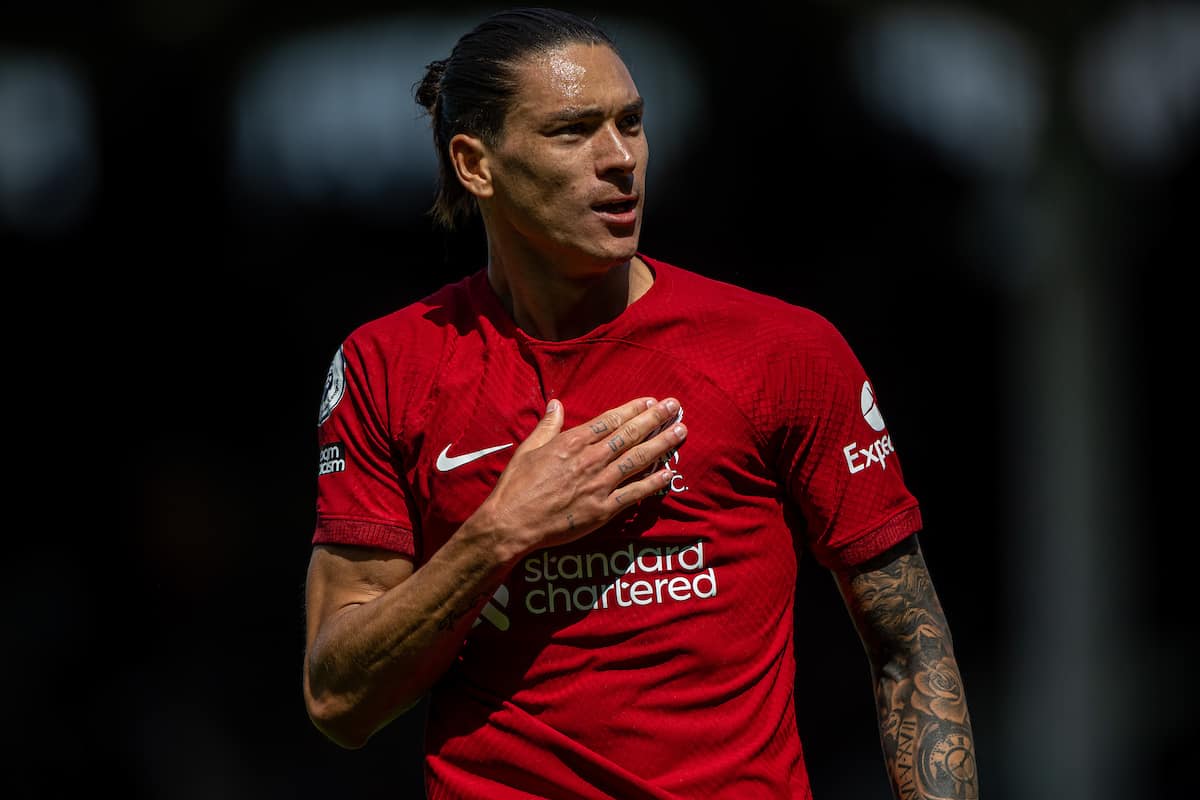 Liverpool were held to a draw by newly-promoted Fulham in their 2022/23 Premier League opener, with some fans claiming Darwin Nunez‘s cameo was “the only positive” from the game.

The Reds made an unusually slow start to the game at Craven Cottage, with Aleksandar Mitrovic’s header putting the hosts in front in the first half.

There was little improvement from Liverpool in the early stages of the second half, who were further disheartened when Thiago limped off with a hamstring injury in the 51st minute.

Jurgen Klopp‘s side looked a lot more potent after the introduction of Nunez and Harvey Elliott. It was the Uruguayan who delivered the Reds’ equaliser with a clever flicked finish, but Mitrovic put Fulham back in front from the penalty spot after being hauled down by Virgil van Dijk inside the box.

Nunez was involved in Liverpool’s second equaliser, laying the ball off for Mohamed Salah to make it 2-2 with 10 minutes remaining.

Jordan Henderson crashed the ball off the bar in stoppage time, but in the end the Reds were unable to find a winner.

Just as he did against Man City in the Community Shield, Nunez made a real impact in the second half, with fans eager to see him start in Liverpool’s next Premier League encounter against Crystal Palace.

The only positive I’m taking is that the reasons we decided to buy Darwin Nunez have already been validated.
We correctly diagnosed the problem at the back end of last season and identified the right solution.

Nuñez and Elliott have to start.

Odd performance that, none of the starters really did well enough, the subs made a big difference and Salah Lots better after the changes. Disappointing start, just got to make sure it’s a one off.

Darwin Núñez the only positive from this premiere. An absolute predator in the penalty box, who smells out scoring opportunities like a shark smells out blood in the water. Still just need to sort of his final touch a bit.

Didn’t lose and really deserved to lose. That’s the only real positive there.

Darwin Nunez equalises for @lfc. Very clear, from that goal alone, that he’ll score bundles. The movement of a goal-scorer.

Darwin Nunez changed the game for us coming on, great finish and assist for Salah. He’s already arrived, has to be starting from now. pic.twitter.com/Pm3XaDutGG

• Not the start we wanted.
• Glad we managed to get something.
• Massive wake up call.
• Nunez has to start from now on.
• We need to sign a midfielder.
• Thiago injury is bad news.
• Hopefully that’s our sh*t game of the season out of the way.

Took far too long to get going there. Thiago injury making a bad day worse. Nunez has to start on Monday.

Didn’t deserve to win. Fulham were better 1st half. We were better 2nd half. Too many subpar performances. Wasted 60mins until Nunez arrived and offered a threat and his runs gave more space to others.

In hindsight, Klopp’s decision to start with Roberto Firmino instead of Nunez didn’t pay off, but that wasn’t Liverpool’s only problem.

As well as Nunez, don’t be surprised to see Elliott get a start against Palace. The midfielder played an excellent pass in the build-up to the Reds’ first equaliser and gave Liverpool a more creative dimension in midfield.

Not the start to the season Klopp would have wanted. Improvement needed at Anfield in nine days time!