Jurgen Klopp has provided an update on seven injured players in the Liverpool squad, with Alisson the only one of those available for Saturday’s trip to Fulham.

The Reds head into the new campaign with a host of injury issues, with a rigorous pre-season taking its toll on the first-team squad.

But Alisson is “fine” to return, Klopp confirmed on Friday, and is expected to start away to Fulham.

Caoimhin Kelleher will not be fit to take his place on the bench, however, with the Irishman “still a few weeks away” after arriving for day one of pre-season with a groin injury.

There are problems at centre-back, too, with Ibrahima Konate “out for a while” after sustaining a leg injury in the 3-0 friendly loss to Strasbourg on Sunday.

Kostas Tsimikas may be the next-closest to a return, the Greek having missed the last three friendlies due to a knee problem.

Klopp explained: “He might be ready, in his opinion anyway, to train next week.”

The biggest problems come in midfield, with Alex Oxlade-Chamberlain a long-term absentee while Curtis Jones and Naby Keita are ruled out with injury and illness respectively.

Keita, however, is expected to return to full training on Friday, with a view to being available for the visit of Crystal Palace on August 15.

“We hope with Curtis we caught it in the right moment,” Klopp said. 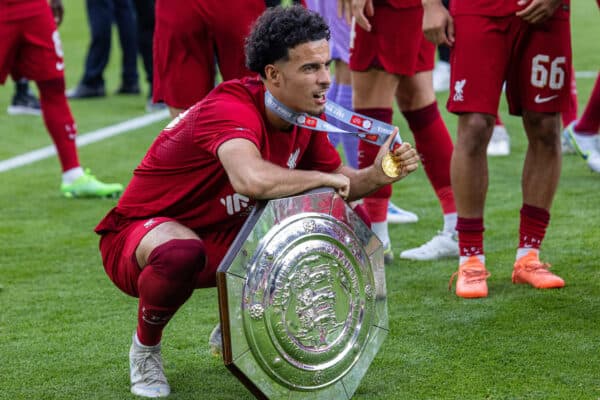 “That’s how it is with young players, they have some kind of stress reactions sometimes and they go over it because it’s no massive pain, but it could lead to something serious.

“We caught it early but still have to be careful now. That’s it with him, he’s not in.”

Diogo Jota is also still out, and though Klopp did not reference the absences of Calvin Ramsay and Kaide Gordon, neither are due to return in the near future.