Jurgen Klopp accepts that injury to Ibrahima Konate will “probably” rule out a summer transfer for Nat Phillips, who could now be required to stay as cover.

Phillips has been touted with a move away from Liverpool this transfer window, with Fulham and Bournemouth among the clubs credited with an interest.

But with Konate now “out for a while” with a leg injury sustained in the 3-0 friendly loss to Strasbourg on Sunday, the decision could be made to keep the No. 47 on Merseyside.

Klopp admitted as much in his pre-match press conference on Friday, ahead of Liverpool’s Premier League opener at Fulham.

“Yeah, probably,” he said when asked if he would now need to retain Phillips.

“It will influence the transfers, yeah. Outgoing transfers, I would say.”

There was no mention of 20-year-old defender Sepp van den Berg, who replaced Konate at Anfield last weekend, though it is likely he is also considered as potential cover.

Konate is one of nine first-team players currently sidelined with injury, including Diogo Jota, Curtis Jones and Alex Oxlade-Chamberlain. 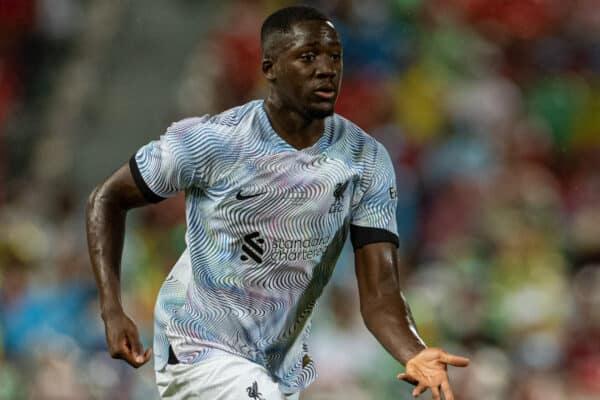 But Klopp has maintained that Liverpool are still unlikely to further add to their squad before deadline day on September 1.

“We cannot sort a problem we have for four weeks with a transfer for a full year,” he insisted.

“That makes, in the moment at least, no sense for us.

“But the transfer window is still open, so we will see. But the plans are don’t go in that direction.”

With just under a month to go before the transfer window closes, there are few other Liverpool players expected to depart – particularly if deals for Phillips and Van den Berg are now ruled out.

Eleven loan deals have already been sanctioned, and any further movement is likely to be on a temporary basis, with Leighton Clarkson and Jake Cain among those who could move.