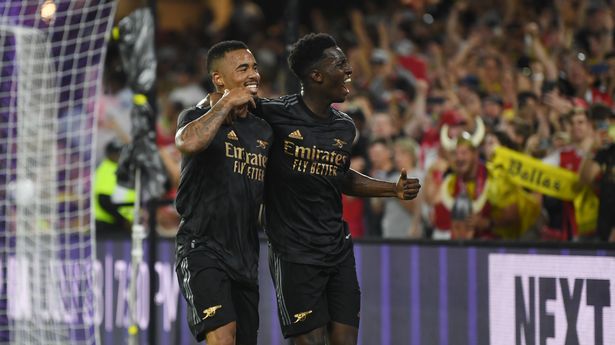 With Arsenal nearing the end of their pre-season tour of the United States, one thing that has become apparent is new signing Gabriel Jesus’ compatibility with fellow striker Eddie Nketiah.

With the Brazilian joining as the Gunners’ marquee signing this summer, many fans would have assumed the £45m man would be leading the line come the start of next season.

However, if Arsenal’s pre-season performances are any indicator of Mikel Arteta’s intentions for the upcoming campaign, we may well see a brand-new strike partnership being formed.

While Jesus has been irresistible thus far after three games in an Arsenal shirt, fans have been quick to point out the blossoming on-field relationship between him and Eddie Nketiah, who the club recently tied down with a fresh long-term contract following a strong end to last season.

Jesus and Nketiah dialling it up 📞❤️ pic.twitter.com/klFrIt51o3

Although they have yet to start together, Arteta had the chance to experiment with both on the park as his side strolled to a 3-1 over Orlando in their latest fixture.

Both forwards are known for their tenacious pressing and ability to link the play to great effect, and having both of them on for nearly an entire half highlighted just how terrifying a partnership it could be for defences next season.

When asked about the growing relationship between Nketiah and Jesus, Mikel Arteta said: “We want to build those relationships, and they haven’t played a lot of minutes together yet. The same with Martin and Gabi, for example, and we have to start to do that.

“We obviously do it in training, but to put it in practice in matches, it’s important, and you can see that they are finding themselves with good timing, and it’s important because there are two players with a big goal threat.”

Goalscorer Eddie Nketiah went on to comment on having Jesus as a new teammate and touched on the pair’s shared “call me” celebration.

“We had a little chat. We’ve been getting on really well. I enjoy playing with him. Obviously we have the same celebration. He called me last time (vs Everton). Hopefully we can continue to score goals and celebrate together!”

The Gunners are next in action against Chelsea over the weekend, and with Arsenal’s new strike force now operating to full affect, why not check out our comprehensive list of the best football betting sites.