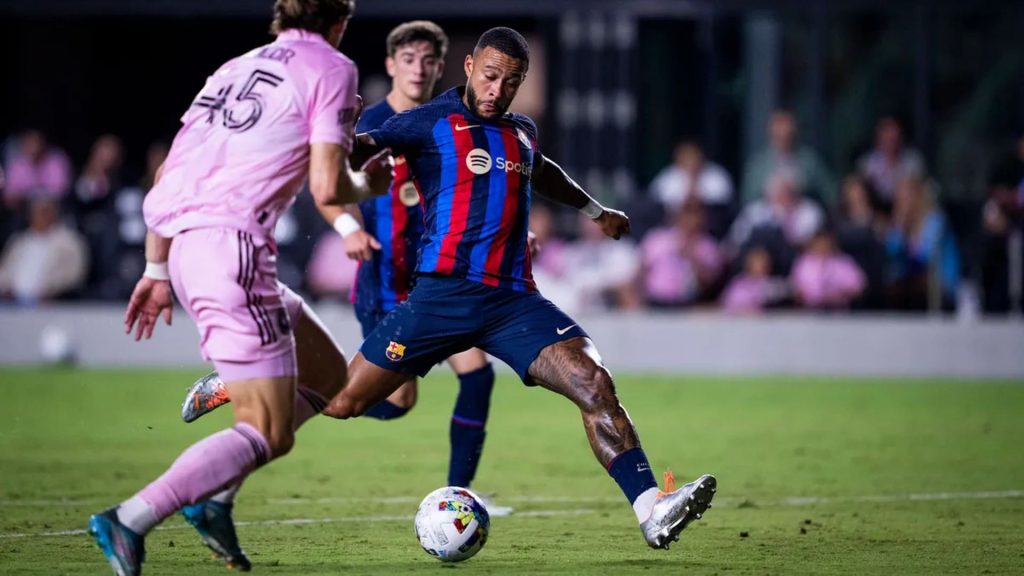 Barcelona were in pre-season action for the first of four fixtures on their tour of the United States as they put Inter Miami to the sword in a 6-0 thumping.

Debutants Andreas Christensen and Raphinha featured in the Blaugrana colours for the first time, with the latter grabbing a goal and assist in an emphatic performance.

However, it was Memphis Depay who stole the show with a truly stupendous piece of skill on the 70th minute mark; a vertigo-inducing drag-back that left his marker dumbfounded before firing low past the Miami keeper to make it five for Barca.

Watch the goal below.

Here’s the fifth from @Memphis 😯 pic.twitter.com/ZxJS8xMZUz

The Dutchman had a joyous start to life in Barcelona in the immediate aftermath of Lionel Messi’s exit last summer, but has since struggled to make a lasting impression on new manager Xavi. Despite this, he notched in a respectable 13 goals last year and remains a talented component of their increasingly potent attack.

While the 28-year-old is eager to stay in Catalonia and fight for his place, the signings of Raphinha and Robert Lewandowski, as well as the extension to Ousmane Dembele’s contract, suggests the club are willing to sell him this summer should a club match their valuation.

Although a piece of skill like the one displayed last night is normally enough to vindicate any player from lacklustre performances, it would seem his career in Spain may well come to an end this window.

Tottenham are thought to be the most likely destination for Depay, and a £14m bid is supposedly imminent which would have a strong likelihood of being accepted given Barcelona’s strenuous financial problems.

Xavi and co are next in action this Sunday as they prepare for a pre-season Clasico with Real Madrid – take a look at our list of the best football betting sites ahead of kick-off.