Liverpool again missed out on the Premier League title by one point after a dramatic final day, and Pep Lijnders has revealed the text messages he exchanged with Jurgen Klopp afterwards.

The Reds went into the final day of 2021/22 knowing they needed to beat Wolves and Man City must slip up at home to Aston Villa if they were to be crowned champions.

So when Aston Villa took a 2-0 lead at the Etihad Stadium, there was mayhem at Anfield. The Reds were held at 1-1 until the 84th minute, when Mohamed Salah put them in front, before a late goal from Andy Robertson secured the victory.

However, an incredible comeback from City eventually saw them retain their title, with Liverpool left wondering what could have been.

Now, in an extract from his new book Intensity, Liverpool assistant manager Lijnders has lifted the lid on the messages he and Klopp sent each other the following day. 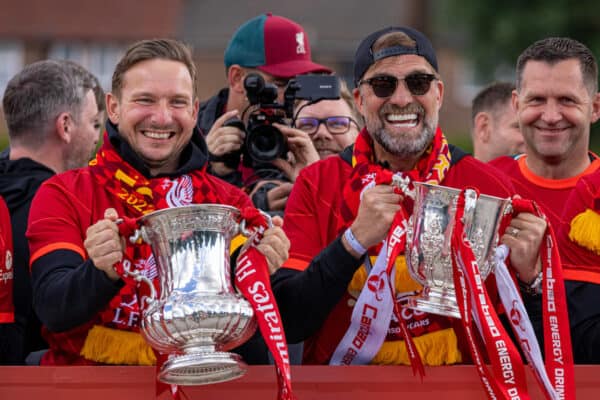 “The morning after, I woke up to a text from Jurgen: “What a season,” the Dutchman said in one excerpt from his book, as quoted by The Echo.

“I respond: “We took everything out of it.

“What a journey… so much happened but always improving, keeping them fit, focused and hungry for the whole decisive period.

“We played each game, how bizarre is that. Men on a mission we were!

“Important we won yesterday. I think we wouldn’t have forgiven ourselves… Honestly, just really proud here!

“Tomorrow will be great, staff together getting your prize. Enjoy the day off!!!”

“I’m sure by this point you can guess what he wrote back… “OUR prize.”

Lijnders also praised Klopp for his words to the players after the match, and singled out captain Jordan Henderson as a player who is “key” to retaining the belief of his teammates.

At that point, the Reds were, of course, preparing for another Champions League final against Real Madrid one week later.

“Jurgen couldn’t have done better when speaking to the boys, in my opinion,” he continued.

“The only way for a club to be successful is with pure leadership, from top to bottom. Because it’s like this: the only path to continuous improvement is to compete against yourself.

“I can’t praise the players enough; everything we achieve is because of their dedication.

“Hendo is key in this. Why? Because he unlocked the belief in the other players even more. Hendo is the reason for the standards and the humility.

“If you ever have a doubt in life, just ask yourself: what would Hendo do? And you get your answer.”