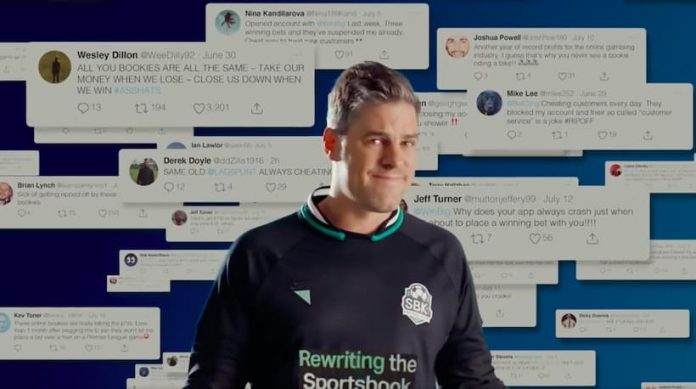 Upcoming bookmaker SBK has fired shots at its rivals in provocative new advertising campaign which pulls no punches.

In a bid to relate to disgruntled bettors, the SBK advert promises to deliver fairer odds and more generous payouts on casino games too.

Not a week goes by without a tweet going semi-viral after accusing a bookmaker of moving the goalposts after accepting a bet in a bid to avoid paying out a handsome wad of cash.

Punters often feel hard done by at the best of times and when they find their stakes restricted after a good run of wins it feels like a kick in the teeth.

Frozen cashouts, tight fisted odds and betting apps that crash at crucial moments can all lead to a feeling that the world of gambling is nowhere near fair at the best of times.

Jason Trost, owner of SBK, is adamant that the sports betting industry needs a kick up the backside and is on a mission to do exactly that.

Launched this Monday, under the title of “SBK – The ad we weren’t allowed to make, but we made it anyway” – the new campaign sees Smarkets CEO Trost ‘take direct aim at SBK competitors’.

We’re here to level the playing field for everyone – by giving our customers the best odds around. No strings attached.

Due to the nature and content of the campaign’s main video, clearing organisation Clearcast refused to give approval for it to be shown on television, saying it would ‘bring advertising into disrepute’.”

“The industry’s old guard has been giving unnecessarily bad odds to customers for so long.” – Trost said, launching the first ad of Smarkets Rewriting The Sportsbook campaign.

“We launched SBK to provide our world-best pricing to the mainstream market in the familiar feel of a sportsbook.

“That’s what this campaign is all about: how our odds are better than the rest who make easy money on casino products and huge sportsbook margins, and we’re not afraid to call them out. I had a blast filming the ad. I hope people enjoy watching it as much as I did making it.”