RB Leipzig are MUCH changed since 2021 games vs. Liverpool – Liverpool FC


Liverpool visit RB Leipzig in their third friendly of pre-season this evening, with much changed for the German club since their last meeting in 2021.

The Reds are in Germany and preparing for their next outing of the summer, which pits them against Leipzig in their newly renovated Red Bull Arena.

After defeat to Man United and victory over Crystal Palace in Asia, Jurgen Klopp will be looking to step up the intensity for his players against Bundesliga opposition.

It will not be the first time Liverpool and Leipzig have met, though it will be only the third time in the German club’s relatively brief history.

Back in 2021, the two sides were drawn against each other in the last 16 of the Champions League, when Europe was still in the throes of the COVID-19 pandemic.

Both legs were held in the empty, neutral venue of Budapest’s Puskas Arena, owing to travel restrictions, with Liverpool running out 2-0 victors ‘home’ and ‘away’. 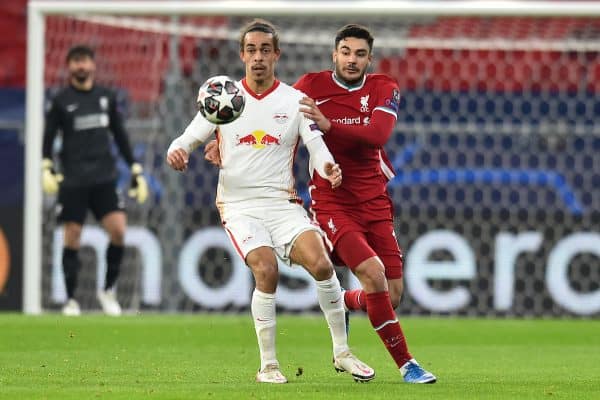 In the dugout for Leipzig just over a year ago was Julian Nagelsmann, who has since departed for Bayern Munich, while three of the 13 players to start over the two ties have since departed.

Dayot Upamecano and Marcel Sabitzer have joined Nagelsmann in Munich and Tyler Adams swapped Leipzig for Leeds this summer; Nordi Mukiele, subject of interest from Paris Saint-Germain, may be next to leave.

But despite those changes – and going through two managers since – the identity remains the same.

After a failed experiment with Red Bull staple Jesse Marsch, who moved through New York, Salzburg and on to the big gig at Leipzig, Domenico Tedesco, the former Schalke manager, was appointed his successor.

Leipzig were 11th in the Bundesliga when Marsch was sacked in December; by May, they had finished fourth, winning the DFB-Pokal – the German equivalent of the FA Cup – along the way.

“From time to time you do come up against different playing styles and tactics,” Naby Keita, former Leipzig midfielder, told Liverpool’s official website in the buildup.

“Leipzig are the sort of team that likes to press high, like we do. They don’t like to let the opposition team play and have the ball.”

These are shared principles through Liverpool and Leipzig, their connection strengthened by links in the transfer market, with Keita joined by Ibrahima Konate last summer.

It should be no surprise, then, that Tedesco took his charges to Austria for a pre-season training camp this summer, too – their schedule overlapping with Thursday’s opponents.

After a gruelling week of training in Aigen im Ennstal, Leipzig took on English opposition on Saturday and won: goals from Angelino, Emil Forsberg and Ilaix Moriba sealed a 3-1 victory over Southampton.

Liverpool will be aware that this is their toughest test yet in pre-season – and arguably the toughest of their five friendlies, not including the Community Shield against Man City.

But for that reason, it stands to be the ideal preparation for the season to come.