Though his future remains unresolved as he spends pre-season with Liverpool, there is “interest growing” in Nat Phillips, including from clubs in Germany.

It has been expected that Phillips will leave Anfield on a permanent basis this transfer window, but there has been no movement for the 25-year-old so far.

Instead, he travelled with the Reds for their pre-season tour of Asia, and after featuring against Man United and Crystal Palace he is expected to be part of the squad for the training camp in Austria.

This comes after a half-season loan with Bournemouth that saw him help the Cherries gain promotion back to the Premier League, with it anticipated that he would then join the south-coast club on a long-term deal.

But while that is yet to transpire, GOAL‘s Neil Jones reports that he, along with academy centre-back Rhys Williams, is still “expected to leave.”

Clubs in Germany and the Championship are credited with an interest in Phillips, who has previously been linked with Burnley.

Bournemouth are likely to be monitoring the situation, though a reported price tag of £15 million may deter suitors, with it suggested that the Englishman could head out on loan again instead.

A move to either Burnley – who have seen James Tarkowski, Ben Mee and Nathan Collins all leave this summer – or Bournemouth would certainly make sense, while Phillips’ early loan spell with Stuttgart explains speculation around German clubs. 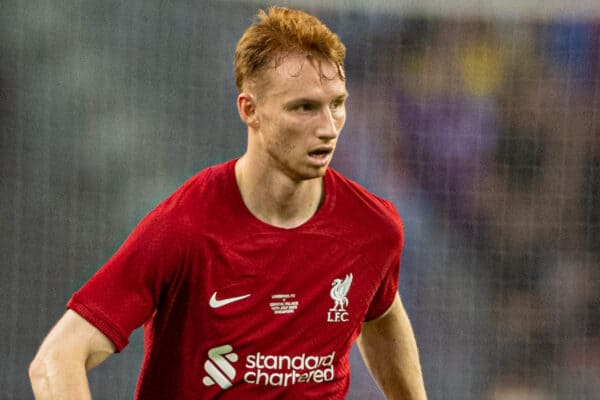 But with Ben Davies on the brink of moving to Rangers for £4 million and Billy Koumetio having already joined Austria Wien on a season-long loan, there is a chance that the No. 47 stays.

Jones writes that Williams “is expected to go on loan to a Championship club,” while it has previously been claimed that Sepp van den Berg will also depart on a short-term deal.

However, Jurgen Klopp is likely to require one of Phillips, Williams or Van den Berg to stay on Merseyside to serve as fifth-choice centre-back.

There is no indication yet which of the trio would be the preferred choice, but it would likely hinge on the offers Liverpool receive in the coming weeks.

If Phillips can be sold, it is almost certain the club would part ways for the right fee.