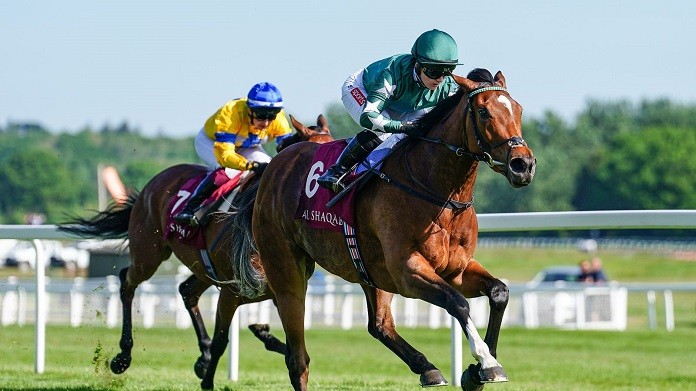 The feature fillies and mares’ race at Glorious Goodwood, the Nassau Stakes, seemingly has the way clear for Nashwa as bookmakers now have her odds-on for victory in 1m 2f Group 1 race on Thursday, 28 July.

John and Thady’s Gosden’s three-year-old shortened in the ante post betting after it was revealed Irish-based La Petite Coco wouldn’t take up her early closing entry. Nashwa, the winner of the Prix de Diane in France, also seems likely to be kept apart from stable companion Inspiral for now as well.

Goodwood defections leave bookies with no option but to slash Nashwa

Inspiral, owned by Cheveley Park Stud, has another target in August on her agenda. Their managing director, Chris Richardson, told the Racing Post she had been “freshened up” since a shock Falmouth Stakes defeat at odds-on earlier this month.

“We haven’t finalised plans but the Jacques Le Marois [at Deauville on August 14] is under consideration,” Richardson said. “We wanted to give her a good four or five-week break, so it slots in well.”

The upshot of Inspiral’s absence is a much weaker renewal of the Nassau Stakes on paper. With Paddy Twomey readying La Petite Coco for a step back up in trip following her Pretty Polly Stakes heroics at home in Ireland, it leaves Nashwa as the clear standout filly in the race and 8/11 with bet365 to follow-up.

With her two main market rivals out of Glorious Goodwood, top betting sites can only cut her odds. Nashwa gets 9lb weight for age from the older fillies and mares in the Nassau Stakes, putting race terms entirely in her favour. The Prix de l’Opera back in France this autumn on Arc day at Longchamp is also on her agenda.

I was hoping Cheveley Park Stud and the Gosdens would step Inspiral up trip, so that left me scrambling to cash out my ante post punt on her! Fillies and mares swerving one of the premier Goodwood races today in favour of other targets is nothing new.

Connections of Alcohol Free were bold 12 months ago and ran in the Sussex Stakes against the boys. That paid off, but these Nassau Stakes defections detract from next Thursday’s big Flat race as a spectacle. Nashwa excelled across the Channel when dropping back down in distance after not staying in The Oaks for the Prix de Diane.

Hollie Doyle gave her a very well-judged ride at Chantilly. Nashwa, rated 112, found plenty for pressure from the short-neck runner-up, and they pulled over four lengths clear of the remainder. Given the generous weight for age terms, there would be need to be an older filly or mare in the Nassau Stakes line-up on a mark of 120+ to trouble her.

There isn’t with Inspiral (121) off to France and fellow three-year-old Tuesday not certain to run either. The latter is officially 5lb better with the handicapper, but didn’t run anything like 117 when a below par fourth getting weight all-round in the Irish Derby. Epsom Oaks heroine Tuesday has also had a lot of hard races during the first half of the season too.

My Astra, one of two William Haggas fillies in the race and runner-up to La Petite Coco last time out, may be the only danger. You can’t blame bookies for shortening Nashwa for the Nassau Stakes when major opposition is minded to go elsewhere. This isn’t what race organisers of the Glorious meeting, or Qatar Goodwood Festival for sponsorship reasons, were hoping for!