Naby Keita produced his best-ever tally in terms of appearances for Liverpool last season, and unsurprisingly the midfielder is looking to improve on that again.

For a player unfortunately renowned for his lack of availability, Keita was largely consistent throughout the campaign just gone.

With 40 outings in all competitions, the No. 8 recorded his highest tally for a single season since swapping RB Leipzig for Liverpool four years ago – with his lowest 16 and his next-closest 33.

His minutes were managed carefully, averaging only 52.2 on the pitch per game, but it was a largely injury-free year for the 27-year-old, who also departed mid-season for the Africa Cup of Nations.

Speaking to the club’s official website during pre-season, Keita reflected on the campaign unfolding “pretty well,” revealing his target to “play in every game” possible. 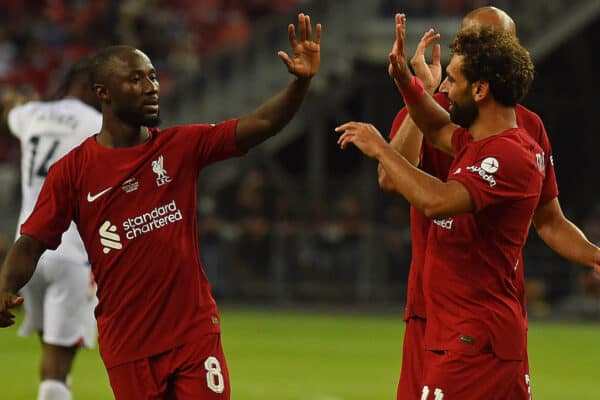 “Every season I set myself targets to try to compare and compete with what I have done in the previous season,” he said.

“I always try to improve and achieve even more. Right from when I first started playing football, I have always been like that.

“Last season went pretty well, I played in a lot of games, which we won.

“This season I would like to do the same again and play in every game I can.

“More than anything else, it’s just to help the team out and maybe get on the scoresheet more frequently.”

In the second half of last season, Keita found himself in a core group of regular starters in midfield, along with Fabinho, Thiago and Jordan Henderson.

Jurgen Klopp relied on him as a regular alternate to Thiago, and more often than not, Keita stood up to the challenge, with his unique brand of progressive midfield play giving Liverpool a useful outlet.

But the new campaign will see competition increase in the middle of the park, with Harvey Elliott seen as a “new signing” along with Fabio Carvalho.

Keita has been part of what could be seen as the ‘first choice’ group in the early weeks of pre-season, however, and the hope will be that he can make another big step and cement himself as key player in 2022/23.