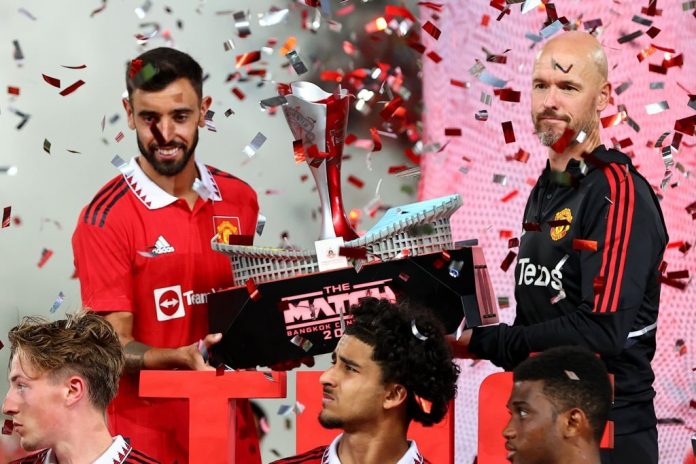 Manchester United will travel to Thailand and Australia for a handful of pre-season fixtures in cities such as Bangkok and Perth as Erik ten Hag’s new era gets underway.

The news of Cristiano Ronaldo’s request to leave the club should a suitable offer comes in couldn’t have arrived at a worse time for new manager Erik ten Hag, who was preparing for life with the 37-year-old on pre-season.

The Red Devils are still against the clock to complete deals and sign duo Frenkie de Jong and Lisandro Martinez before the opening Premier League fixture against Brighton on August 7th.

Here is a comprehensive breakdown of how Manchester United’s pre-season will operate:

You can find all the results from Manchester United’s pre-season fixtures here as they happen:

Both the Melbourne City and Crystal Palace games will be played at the Marvel Stadium in Melbourne, Australia whilst the Aston Villa match on July 23 will be at the Optus Stadium in Perth which is expected to gather around 60,000 fans.

Oslo will welcome Manchester United and Atletico Madrid for a friendly at the home of the Norwegian national team – the Ullevaal Stadion a week later on July 30.

The day later, Erik ten Hag will manage his first home game in charge of the club against Rayo Vallecano at Old Trafford.

Manchester United beat Liverpool 4-0 in their opening pre-season fixture on Tuesday 12 July in Bangkok, marking Erik ten Hag’s first game in charge of the Red Devils one to remember.

Three days later in Melbourne, Australia, United will take on Melbourne Victory on July 15 as well as playing host to Crystal Palace on July 19.

Four days later, Manchester United’s pre-season will finish in Oceania after playing Aston Villa on July 23 in Perth, the capital and largest state in Western Australia.

A week later on July 30, United will play against Atletico Madrid in Oslo, Norway and then finish their pre-season campaign against Rayo Vallecano in Manchester the day later on July 31.

United’s 4-0 thrashing of Liverpool began at 1pm BST in the United Kingdom and 9pm local time in Bangkok, Thailand, making the fixture an accessible one for the local fans.

The Reds will line-up slightly earlier in the following games across Australia, with kick-off against Melbourne City scheduled for 11:05am BST (9pm local time) on July 15.

Against Crystal Palace, the first whistle will be blown at 11:10am BST (9:10pm local time) and it will be 35 minutes later for the match against Aston Villa, which starts at 11:45.

In Oslo for the friendly against Atletico Madrid, the referee will begin the game at 2pm local time which is 1pm BST for the viewers in Manchester and the UK.

The final encounter will take place at Old Trafford, the home of the Red Devils and it will kick-off against Rayo Vallecano at 5pm.

If you fancy a punt on any of Erik ten Hag’s first games in charge as Manchester United manager, check out the best football betting sites here!