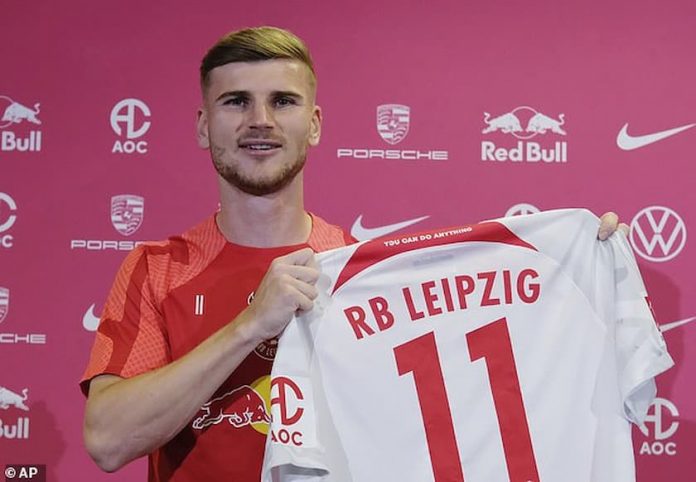 Man United’s transfer window has been nothing short of disappointing for Red Devil’s fans. It has been revealed that United made a desperate attempt to sign Timo Werner at the 11th hour before his Leipzig move.

Timo Werner has recently rejoined his old club RB Leipzig for £25m from Chelsea. However, it seems in a desperate attempt to sign a new forward United attempted to get Werner’s signature at the 11th hour.

#mufc made an 11th-hour attempt to sign Timo Werner from Chelsea before he rejoined RB Leipzig for £25million. [@samuelluckhurst]

Werner, 26, joined Chelsea for £45m in 2020 and scored a poor 23 goals in 89 games but he has won the Champions League and Club World Cup whilst at Stamford Bridge.

With Werners lack of personal success in England he decided a move back to his old club where he shone was the route to go instead of joining Chelsea rivals Man United.

This snub comes in the same week Leipzig have announced Benjamin Sesko as a new player, three weeks after his agent met with Manchester United football director John Murtough.

What is infuriating for United fans is the board have ignored former interim manager and recruitment consultant Ralf Rangnick’s recommendations of RB Leipzig players Josko Gvardial, Konrad Laimer and Christopher Nkunku, and pursued two players who have ended up moving to Leipzig.

With Ten Haag looking to reunite with former Ajax player Ziyech the United board are resisting. The board have backed Ten Hag’s preference for targets familiar to him but Ziyech has been seen as an exception. Ziyech has been priced at 2/1 to join United by the best UK football betting sites.

Erik ten Hag is being met with resistance from the #mufc hierarchy amid his interest in signing Hakim Ziyech from Chelsea. [@samuelluckhurst]

What seemed like a promising beginning to the transfer for United with De Jong looking a likely signing and Eriksen signed on a free, it has now turned into a disaster and it seems the board are now making the final decisions again.