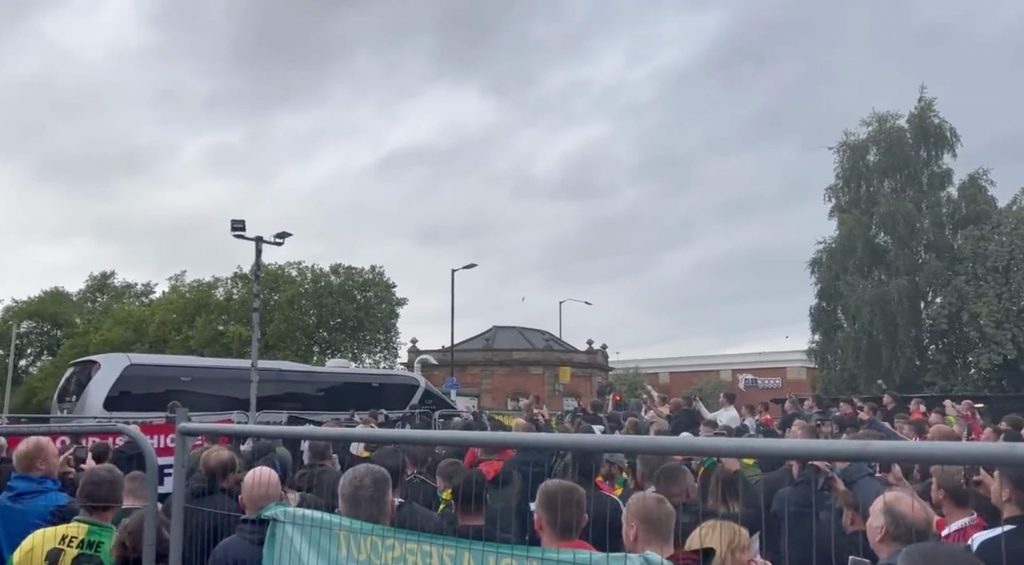 Manchester United fans have been seen throwing bottles and chanting “murderers” as the Liverpool team bus made its way past the imminent protests against the club’s owners.

Anti-Glazer demonstrations are expected to be highly disruptive this evening with concerns over postponement snatching the headlines this week, and it seems disgruntled fans are already out in numbers.

Amidst chanting, flares and smoke bombs being seen outside Old Trafford, there have also been rather unsavoury scenes captured. United fans can be seen in the video below launching bottles towards the Liverpool team bus, with chants of ‘murderers’ heard in the background.

Thought it was a protest about the owners they were going for?pic.twitter.com/0QI2kGrFpw

However, elsewhere the protesters have been mocked by some on the internet for being sidetracked by the arrival of new signing Casemiro, who was acquired by, you guessed it, Glazer investment.

The Manc’s biggest protest ever involves swarming their newest £60M signing to get a glimpse, queueing at the club’s megastore to buy their shirts & shouting murderers at the LFC coach.

Some protest that lads well done 👏🏼

“This is going to be the biggest protest against the Glaz… oooh a shiny new toy” https://t.co/mzUciAkTF2

While the march is set to intensify closer to kick off as they make their way closer to the stadium, it seems social media and the press are picking up footage thick and fast.

Check out our list of the best football betting sites ahead of the 8pm kick off.