The Reds were favourites to beat their beleaguered rivals at Old Trafford, but they threw in an insipid showing from the off.

Jadon Sancho and Marcus Rashford scored for the hosts, while Mohamed Salah pulled a late goal back, but Jurgen Klopp‘s side never deserved anything from the game.

That’s now just two points from three Premier League matches this season, as a mini-crisis turns into genuine cause for concern.

Here we compare our player ratings with those of the Liverpool Echo, NBC Sports, WhoScored, FotMob and the This Is Anfield readers. 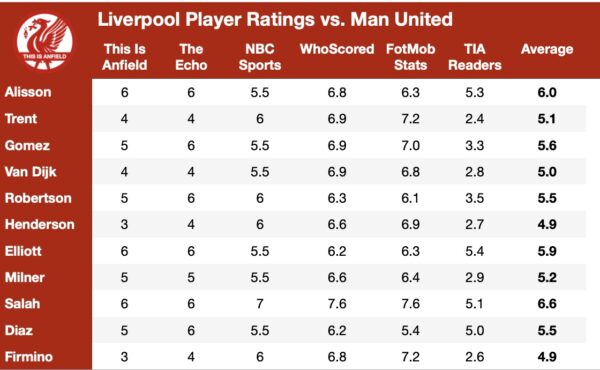 This was a night to focus on the worst Liverpool players, unfortunately, with Jordan Henderson (4.9) and Roberto Firmino (4.9) deemed the poorest performers.

Both produced awful displays in their respective position, with Henderson poor in the No.6 role, lacking both quality and energy.

Ian Doyle of the Echo claimed the skipper was “caught out of position far too often”, as well as giving the ball away for the “killer second goal.”

Meanwhile, Firmino was just as bad in attack, with TIA’s Henry Jackson saying the Brazilian is a “pale imitation of the once-great player who used to light up games.” 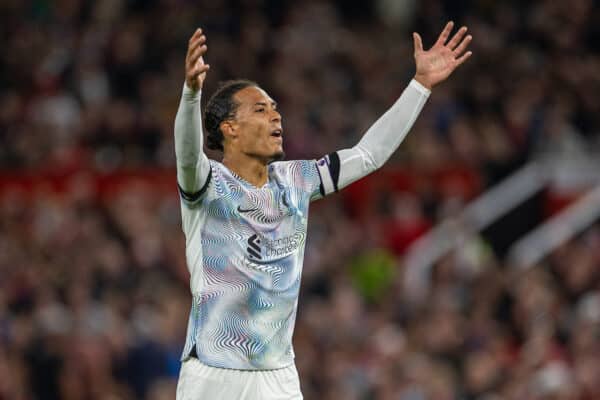 Next in the reckoning was Virgil van Dijk (5.0), who looked slack and almost disinterested at times at Old Trafford.

Andy Edwards of NBC Sports felt that the Dutchman’s dip in form is “crippling the Reds right now”, given his enormous influence.

Salah (6.6) got the highest average and “instantly caused panic in the United defence” when he had the ball, according to Doyle.

Next up for Liverpool is Saturday’s visit of Bournemouth (3pm BST) – frankly, only a convincing victory will do.