It has been an “excellent” start to life on loan for James Balagizi, with the Liverpool youngster trialled in a surprising new role at Crawley Town.

Balagizi stands out as one of the best young players in Liverpool’s academy, but last season saw the 18-year-old’s step up to the under-23s blighted by injury.

He still made 29 appearances across the age groups, including regularly for the under-19s in Europe, while he was named on the bench for first-team cup clashes with Norwich and Shrewsbury.

While he could have joined the senior squad for pre-season – as he was expected to last year before an untimely arm injury – the decision was made for Balagizi to head out on loan instead.

Joining League Two side Crawley Town on a season-long deal at the end of June, the attacking midfielder linked back up with former England youth manager Kevin Betsy.

He has started 3 of 4 Crawley friendlies, playing as a six, a position he rarely played for Liverpool but Betsy has briefly utilised Balagizi in for England. pic.twitter.com/QBYVmyZEFj

And though these are early days, it appears as though Betsy has a new role in mind for Balagizi, who has shifted from his natural duties closer to the forward line to feature as a No. 6 throughout pre-season so far.

His first start came against Championship side QPR, playing the first 45 minutes in a 3-3 draw, and after a planned rest for a 9-0 win over East Grinstead was back for the 5-0 win at Three Bridges.

Most recently, Balagizi started and playing 75 minutes in a 2-2 comeback draw with Scottish Premiership side Hearts, after which Betsy hailed him as “excellent.”

The teenager was involved in a 21-pass move for Crawley’s first of the afternoon in Edinburgh, looking at home in his new deep-lying role as he offered a constant outlet and recycled possession.

Enjoyed this today. @JamTarts looked a cut above early on, but @crawleytown better in the 2nd half. Great long range goal by Kingsley. Stand outs for Crawley were James Balagizi, an 18 year old on loan from @LFC in front of the back four, and Dom Telford up top scoring a brace. https://t.co/IpyigMCQwl

It is certainly interesting to see Balagizi used as a No. 6, having typically been deployed as a No. 8, No. 10 or even on the wing at Liverpool.

He is one of the tallest and strongest players in the Reds’ youth ranks, and while Betsy will be given the freedom to use his loanee how he wishes, there could be a longer-term future for Balagizi at the base of the midfield.

That could provide him the clearest pathway into the senior setup at his parent club, of course, with there little in the way of specialist cover for Fabinho. 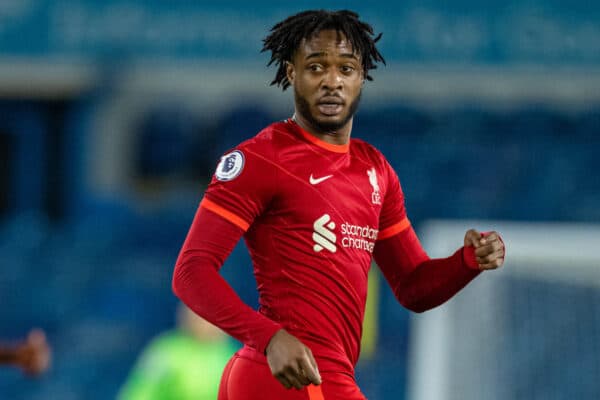 Jurgen Klopp has named Jordan Henderson and James Milner as the de facto backups for the Brazilian, but it is clear that neither are seen as full-time occupants – and the latter, as it stands, will leave the club next summer when Balagizi returns from Crawley.

Tyler Morton has already been shifted back into his natural No. 8 role, while the profile of midfielder Liverpool have been linked with – namely Jude Bellingham – suggests future targets will be for the more advanced positions.

League Two is a distance from the Premier League and Champions League, of course, but those within the club will be monitoring Balagizi’s progress at Crawley with keen interest.