Paul Glatzel has had a tumultuous time with injuries in recent years and his summer has been focused on recovery once more, and another loan move is still on the cards.

The 21-year-old joined Tranmere on a season-long loan deal in 2021/22, and although he battled through fitness issues he enjoyed a productive year nevertheless.

In League Two, Glatzel made 21 appearances with a return of seven goals and six assists and at the conclusion of the campaign he picked up Tranmere’s Man of the Match award.

It was recognition for having been named Man of the Match more times than any other Tranmere player over the course of 2021/22, despite his season ending early due to a hamstring injury.

The summer is, therefore, an important one to get his body right and it’s an ongoing process having not been involved in any pre-season outings for the academy so far.

And after Liverpool’s under-21s secured a 3-1 victory over Kidderminster Harriers on Friday evening, manager Barry Lewtas spoke of Glatzel, his fitness and future with the Liverpool Echo.

“At the moment, he has been training a little bit and doing a bit of fitness work,” Lewtas explained. “We will see where we are with that one. Paul is still a Liverpool player. 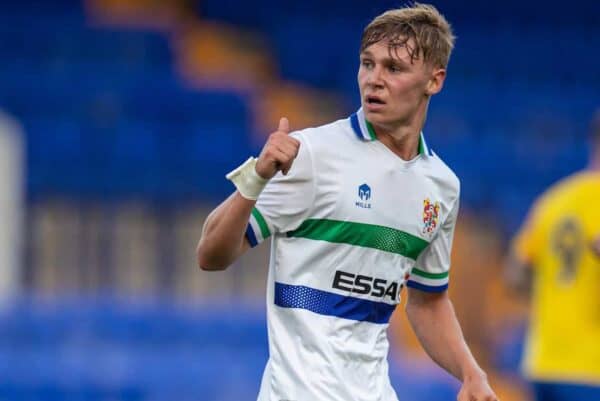 “He picked up an injury at the end of last season, so it is about making sure he is ready to go when he is right. He is all good.

“Potentially,” added Lewtas on another Glatzel loan for the coming season. “It is always difficult for me to say about these things.

“Paul, I thought, did extremely well at Tranmere. He scored goals when he played, certainly down the middle, and I thought his development at Tranmere was excellent. Let’s see where that goes.”

Liverpool have currently agreed ten loan deals for the upcoming season with Tyler Morton expected to make it 11 with a move to Blackburn, and more could be in the reckoning.

“If the right opportunity comes, we will certainly be trying to get boys where we think they are best fitted,” Lewtas added.

“For some of our boys, a loan probably is the next step so it is making sure we get the right move for them.”

Glatzel is in contract with Liverpool until next summer and it ensures it is a big season ahead for the 21-year-old forward, who broke onto the scene in 2018/19 for the Reds with 29 goals and 10 assists in 34 games for the academy.