Jurgen Klopp‘s side enjoyed another valuable run out on Thursday evening, but it was Darwin Nunez that stole the headlines and his teammates’ attention after finding the net four times.

The Reds were back on mainland Europe for the next stage of their pre-season, with RB Leipzig playing host to the third pre-season friendly of the summer.

And it ended with a convincing 5-0 Liverpool victory which showed plenty of positive signs for the 22 players who featured, just two weeks out from the start of the Premier League season.

Nunez, however, was the one to dominate the post-match discussions after scoring four goals in just 45 minutes – and he needed only 20 to notch a hat-trick in a confidence-boosting display. 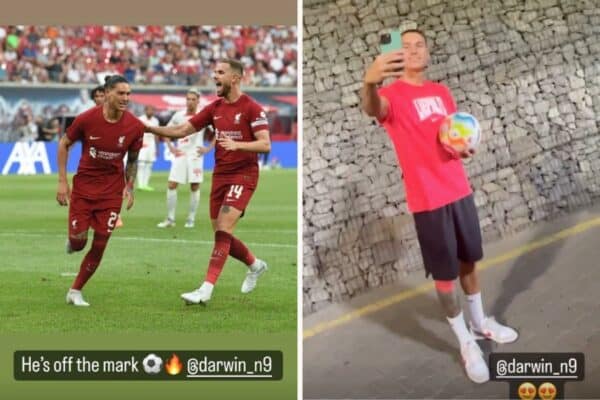 After bizarre pre-season doubts, it was the ideal response and Nunez’s teammates enjoyed the show as much as anyone.

Harvey Elliott and James Milner, in particular, were “buzzing” for the No. 27 and had a simple message of “let’s hear them” following on from the puzzling social media criticism:

And the man himself certainly enjoyed his evening, no doubt feeling some pressure has lifted off his shoulders, even if it is just pre-season:

The match saw 22 Reds feature, with seven pushing to the 60-minute mark as pre-season starts to ramp up with half of the summer friendlies now complete.

Adrian and Virgil van Dijk both played an hour and “enjoyed” the Reds’ dominance, while Ibrahima Konate‘s 45-minute outing was a special one back at his former club:

And while much of the focus was on those who could start at Fulham on August 6, an opportunity still came the way of two young Reds, Harvey Davies and Stefan Bajcetic.

The pair played the final 30 minutes and were “very happy to get more minutes and experience with this club,” and both impressed, Bajcetic with his role in the fourth goal and Davies’ composure and distribution.

The latest pre-season win was a convincing one and with six days until the meeting with Salzburg, there is plenty of training to be done as the Reds head to Austria.

The importance of time on the training track is not lost on the players, but in the words of Andy Robertson, “I don’t think any of us look forward to Austria.”