Liverpool have launched a new app for supporters to shop the entire LFC range on their mobiles, including exclusive discounts not available anywhere else.

With Nike taking over as Liverpool’s official kit manufacturer in 2020, there has been some eye-catching merchandise on the market.

Previously, the only way to get hold of it was either in store or online, but now the club have launched their own official shop app for fans to shop on devices.

Available on iOS and Google Play, the Official Liverpool FC Store app is free to download and gives supporters exclusive opportunities while they shop.

While shopping the entire LFC range, fans can save items to their wishlist and take advantage of in-app discounts and promotions, with news on the latest product releases and exclusive LFC store content.

The app also allows fans to locate their nearest LFC store to shop in person. 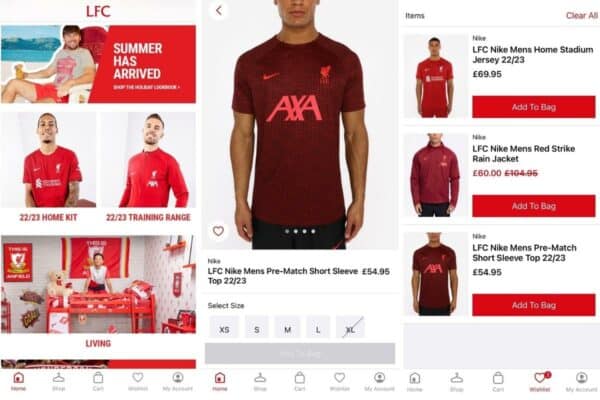 Already this season, Liverpool have released their new home kit for the 2022/23 campaign, while the Reds also debuted their ‘dizzying’ white away kit, complete with an all-over iridescent pattern.

Later this summer will bring the launch of the new third kit, which is expected to be dark green with vivid red detailing.

Along with the new kits, Nike have provided a full range of training gear for the upcoming season, along with their fashion and lifestyle range.

Earlier in July, the club also confirmed they had extended their kit sponsorship deal with Standard Chartered to 2027, taking the partnership to 17 years in total.

The Official Liverpool FC Store app is now available and free to download on iOS and Google Play here.