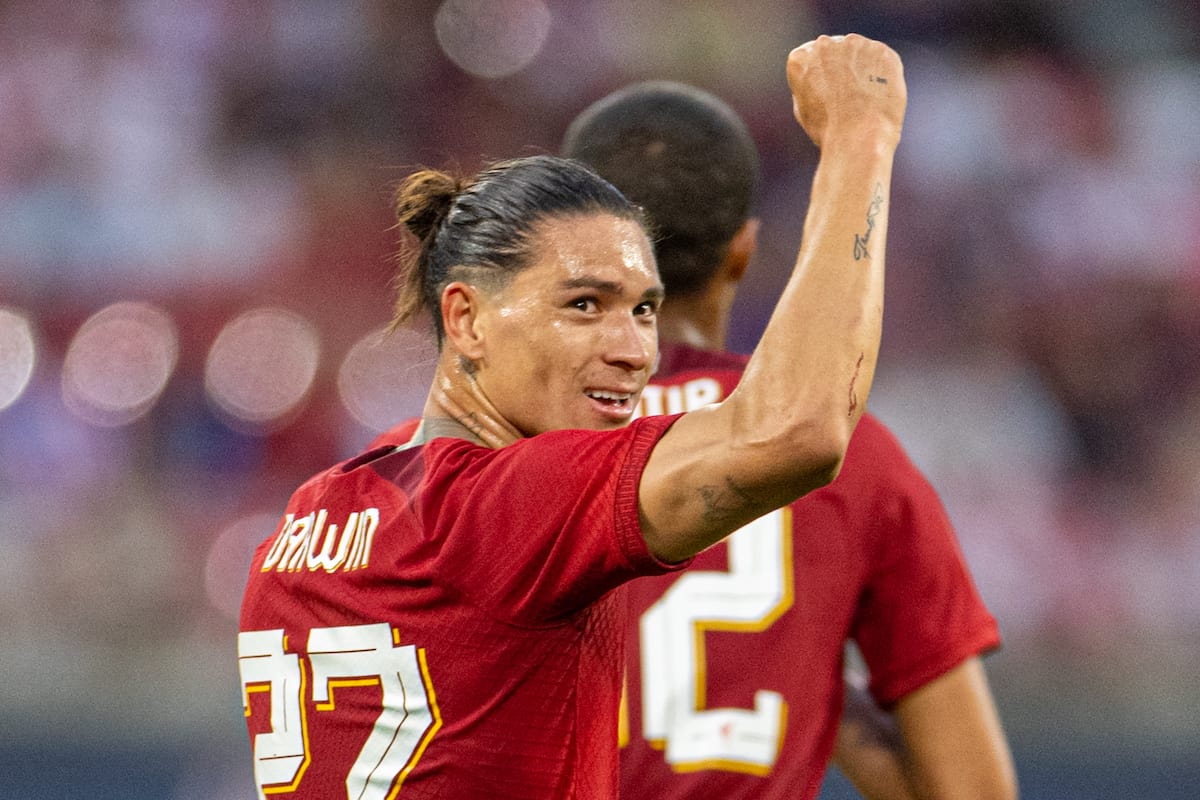 Darwin Nunez was subject to the predictable trigger-happy social media reactions during Liverpool’s tour of Asia but his four goals at RB Leipzig was the ideal response.

With Nunez arriving with an £85 million price tag that will make him Liverpool’s most expensive signing in club history, he was always to be under the microscope, even in pre-season.

It has largely come from rival supporters with nothing else better to do, but that judgement can be so quickly made has been bemusing, to say the least.

Jurgen Klopp and Trent Alexander-Arnold both spoke of the belief they have in what Nunez will offer the team moving forward and just like the latter said, goals did come “like London buses.”

The No. 27 came on in the second half of the 5-0 win at Leipzig and had a hat-trick to his name after just 20 minutes, before notching his fourth in the final minute.

The reaction from Liverpool fans after the match and Nunez’s goals was on point, as you’d expect!

Apart from his 4 goals and the excellent header that was saved, and the hard pressing, and the intelligent runs, what else did Darwin Nunez do in that 45 minutes away against one of the best teams in Germany? Clear waste of money ?

Nunez to those who have been slandering him for the past two weeks. lol pic.twitter.com/3iUrdq9aBn

I don’t really place much value on preseason games, it’s all about minutes in the legs.. but, a Nunez hat-trick signals a bad day for the . ratio bro Twitter accounts who wrote him off after 30 minutes. Stick to EA Sports FC #RBLLFC

I assume people who got their knickers in a knot and trolled Darwin Nunez based on an hour our first 2 preseason games will now say ‘it’s only preseason now’? Twitter is hilarious! Trust Klopp and the recruitment team! ????

Looking forward to all the Darwin comps after that.

Anybody who complained about Nunez in the last match want to admit to being a kneejerk dipshit? ?

People slandered Nunez just for him to score four goals in a half ???

One could say Darwin Nurez’s career has evolved tonight.

Yes, it is still pre-season but the goals and the performance will come as a major boost to Nunez at the start of the latest training camp in Austria.

The pieces are starting to come together and as the manager has noted, he is a different style of forward than what Liverpool has grown accustomed to in recent years.

A confidence booster at the right time, now for more.