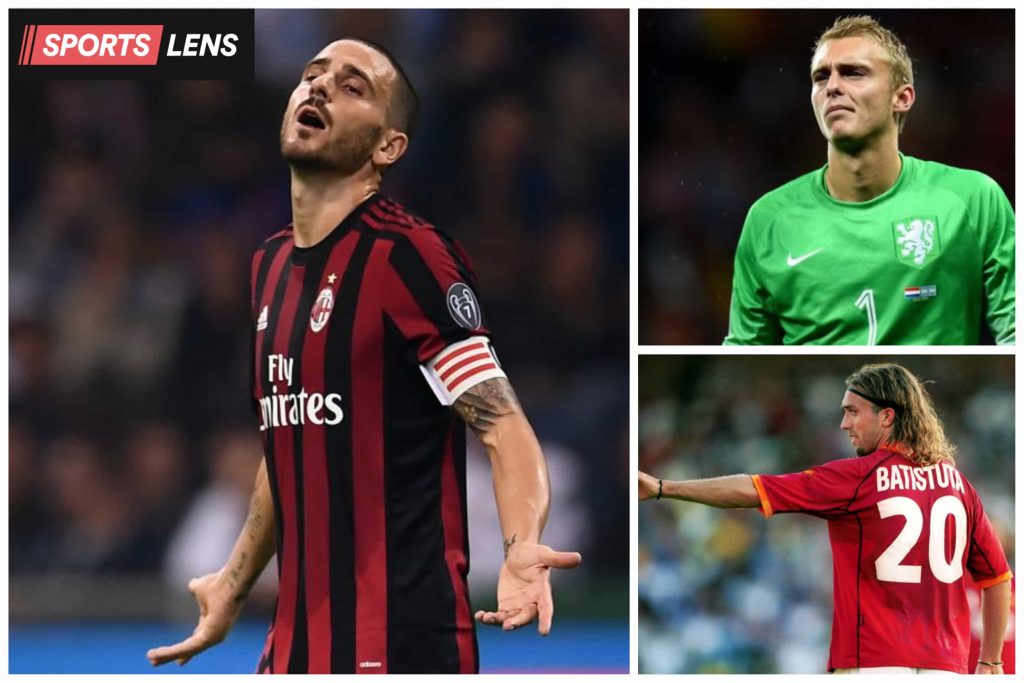 After the confirmed transfers of Robert Lewandowski and Kalidou Koulibaly this week, we have been busy racking our brains to put together a comprehensive list of the most expensive football transfers involving players 30 or over.

This is not the only time Juventus’ veteran defender Leonardo Bonucci will feature on this list.

Aged 30, the Italian international made the switch from Turin to Milan only to return a year later for £31.5m. Just 377 days had passed in a disastrous career move that has gone down as one of the worst transfers of all time.

For all their ridiculous spending habits and inflated transfer fees, Barcelona managed to pull off one the sales of the century back in 2019.

Valencia agreed to pay £31.5m for the Blaugrana’s back up keeper Jasper Cillissen. Granted, the then-30-year-old was the Netherlands’ first-choice keeper and would certainly be a starter at the majority of other clubs.

However, with Marc Andre Ter Stegen holding down the starting spot, the Dutchman moved to southern Spain in search of more minutes.

He has since gone on to play frequently for Valencia, although he is again featuring less and less as he approaches 33.

Next on the list we have one of the most potent strikers of all time as Gabriel Batistuta switched Florence for Rome in 2000.

He became the most expensive player over 30 at the time and his breathtaking goalscoring record for Fiorentina demanded an incredible fee of £31.5m, which back then, was a substantial fee for anyone, let alone a player approaching 34.

Roma’s investment turned out to be a shrewd one as the Argentine netted 20 times to help his side clinch the Serie A title in his debut season.

After establishing himself as one of the more talented midfielders in Italy, Roma’s bullish Belgian attracted a lot of potential suitors before his move to Inter Milan in 2018.

Despite this, it turned out to be a disappointing move for the then-30-year-old, who spent just one full season at the San Siro before being loaned to former club Cagliari for the next two seasons.

He now plys his trade in his native Belgium for top-flight club Antwerp.

One of the newest additions to this list, Napoli’s Kalidou Koulibaly has completed a move to Chelsea after spending eight years in southern Italy.

Now 31, the Senegalese international has long been admired by a whole host of Europe’s elite clubs for his pace, power and technical ability.

One former manager, Carlo Ancelotti, once labelled Koulibaly one of the best defenders he had ever worked with, and before his move to West London he was touted as Napoli’s next captain.

And so, we continue our story of Bonucci’s rather incredible year in Milan.

The first transfer in 2017 saw him leaved his beloved Juventus for £37.5m aged 30 after a heated exchange with manager Max Allegri, who both screamed profanities from the sidelines after a 4-1 win against Palermo.

He received a vicious reception by the supporters who used to ring out his name when he returned to the Allianz Stadium, and as mentioned, returned home a year later citing the move to Milan was completed “in a moment of anger”.

After leaving Tottenham and heading to China in 2015, Brazilian midfielder Paulinho returned to Europe two years later after Barcelona, rather incredibly, paid £37m to bring him to the Nou Camp.

With football fans everywhere scratching their heads, no one was prepared for how influential he would turn out to be in Ernesto Valverde’s pragmatic side. He played a major part in winning La Liga for Barcelona, playing 49 times and scoring nine goals.

Despite putting in consistently good performances, he was loaned back to Evergrande two years later who then exercised an option to buy. While no one is quite sure as to how this transfer worked, Barcelona’s fraudulent former president Josep Bartomeu is said to have had business ties with the Chinese club’s owners, thus shrouding this peculiar exchange in suspicion.

Instantly making his way into the top three, Robert Lewandowski’s confirmed move to Barcelona this week amounted to a reported £42.5m.

Now approaching 34, the Polish international has shown very little sign of slowing down. In fact, in his 12th Bundesliga season, Lewandowski recently notched in his 300th goal in the competition. That includes over 100 strikes since he turned 30 in 2018.

We can not wait to see how will fare in La Liga.

At number two, we have Miralem Pjanic who was involved in a bizarre swap deal with Brazilian midfielder Arthur.

To put that into context, Barcelona swapped an exciting young talent in Arthur for a then-30-year-old entering the twilight of his career.

He was never in any manager’s plans upon arrival and spent last year on loan to Besiktas.

We can’t help but think this was certainly another dodgy dealing by their former president, and one which has left the club just about keeping their head above water amid the threat of financial ruin.

Clocking in at number one, we have arguably the greatest goalscorer in history.

After a stupendous spell at Real Madrid scoring 451 goals in 438 appearances while picking up four Champions Leagues along the way.

Aged 33, he is by far and away the most expensive player aged 30 or above, and his move to Turin can certainly be classed as a successful spell. The Portuguese captain scored 101 goals in 134 games, but ultimately failed to lead the Old Lady past the Champions League quarter-final, something the £105m investment was hoping to bring.