Did I mention that Liverpool need a midfielder?

Because whichever social media nook or cranny you peer down, that’s the word on the tweet. Why? Because Thiago and Alex Oxlade-Chamberlain are injured again and Naby Keita keeps missing games here and there.

Between them, they’ve got the availability of an Arriva bus on Merseyside, while Jordan Henderson carries more detractors than a double-decker and has done so for so long that it now detracts from the detractors’ detractions.

James Milner is written off by some as too old, despite being the same age as Gary McAllister was in the 2001 treble season and looking as fit as ever, and Curtis Jones is the latest Scouse scapegoat having yet to turn his vast potential into something more tangible.

He has the ability to come good, but it needs to be this season.

That leaves the one midfielder everyone agrees must always start – Fabinho – plus three kids in Harvey Elliott, Fabio Carvalho and Stefan Bajcetic, each of whom are being developed into midfielders comfortable playing in Jurgen Klopp’s system having arrived at Liverpool as a winger, No. 10 and centre-half respectively.

Oh, and Liverpool’s 11th midfield option never plays there because he can run a game from right-back instead of having to run around pressing opponents. Not that moving Trent Alexander-Arnold into midfield would make any sense given he’s as irreplaceable a right-back as there is in football.

So with envious eyes being glanced down the road to Manchester where they’ve got McFred… sorry, De Bruyne, Gundogan, Rodri, Phillips, Silva and, er, Palmer (unless you’re counting Grealish and Foden as midfielders?), the demand for Klopp to buy, say, a Dortmund-based 19-year-old valued at over £10 million has been ramped up. 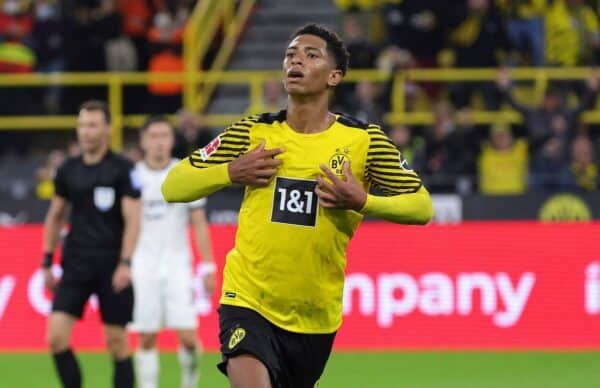 But it ain’t gonna happen. Not this summer anyway, as Jude Bellingham seemingly isn’t for sale until 2023.

By that time he’ll be a 20-year-old with World Cup experience under his belt and had another season to develop (and, in my view, he needs to given he’s still scored as many league goals for Birmingham City (four) as he has for Borussia Dortmund).

So what does Klopp do in the meantime? Stick with his plan of rotating the midfielders he currently has to cover three positions? Or step away from his, and LFC’s, well-documented transfer strategy of acquiring long-term strategic targets rather than short-term stop-gaps?

You can probably find the answer in the words ‘Ben’ and ‘Davies’ – the only real panic buy under Klopp’s management – and also in what he said last month.

“We cannot just add on midfielders,” he said. “We respect the contracts with our boys as well, that means as long as we signed them they get all our support – in training, between the sessions, during the games and between the games. That is the situation we have; really, you can count our midfielders.”

After Thiago got injured at Fulham his stance changed slightly – “a transfer must make sense now and in the long term; we have eight midfielders, we still have enough midfielders. It is not that we lack midfielders, but it’s just that some of them are injured” – but he ended by adding: “We have to see how we react to that – but for sure, not panicking.”

He’d never make a Man United manager with an attitude like that.

Although for what it’s worth, I think Liverpool do need an additional midfielder – and, given Liverpool’s pursuit of Aurelien Tchouameni early in the summer, so too does/did the boss. 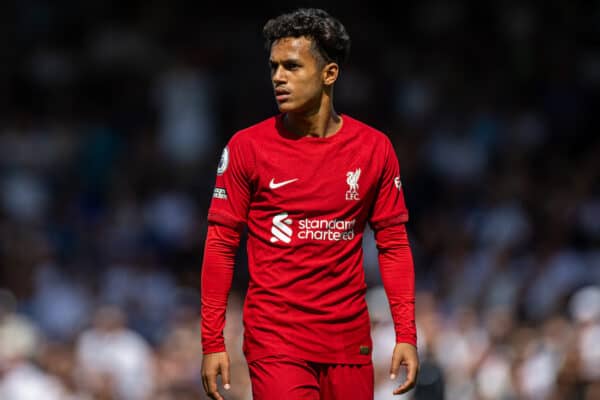 Midfield is the most demanding position to play under Klopp and although having five subs potentially means more minutes shared between them all, three of his experienced options tend to pick up regular injuries.

That said, he also makes a valid point. This is real life, not Football Manager, and you can’t stockpile players on high wages and not use them.

If you want to attract the best young players to your club by showing them there is a pathway to the first team, then you actually have to play those young players for it to remain a credible philosophy.

That means Elliott, Carvalho and the emerging Bajcetic must (and will) be given the trust of their manager to step in and step up.

Maybe not all at the same time, but last weekend’s game against Fulham is worth another look as Liverpool were better when Thiago and Fabinho were replaced by Elliott and Milner.

Don’t get me wrong, I’d have Fabinho and Thiago in my starting XI every day of the week including bank holidays and February 30, but at Craven Cottage it looked like the previous weekend’s Community Shield, coming on the back of a demanding pre-season, had taken a lot out of them.

Elliott and Milner were much fresher, and it was those two, both playing as No. 8s, who combined brilliantly to set Mo Salah away to cross for Darwin Nunez’s equaliser. 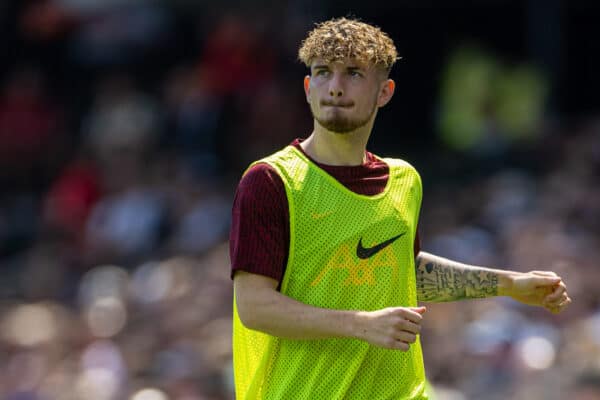 After that, Henderson crossed for another Nunez chance, only for Fulham to scramble the ball away from goal; Milner crossed for Nunez to head the ball to Luis Diaz, whose effort was deflected wide; Elliott supplied the pass that led to Alexander-Arnold crossing for Nunez to nudge the ball to Salah to make it 2-2; Henderson hit the bar in stoppage time.

Take away Joel Matip’s sloppy pass leading to Virgil van Dijk conceding a rare penalty and I’m absolutely convinced the impact of Elliott and Milner – plus Henderson playing much better at No. 6 than he had at No. 8 – would have won that game for Liverpool.

Yet across most of the post-match analysis I saw there was very little mention of the midfield that Klopp ended up with playing such a pivotal part in ensuring the Reds got a point from a match they’d have deserved to lose on their first-half display.

Yes, Nunez made a difference, but he wouldn’t have had a sniff without the midfield lads laying the platform for Salah and Alexander-Arnold to create. 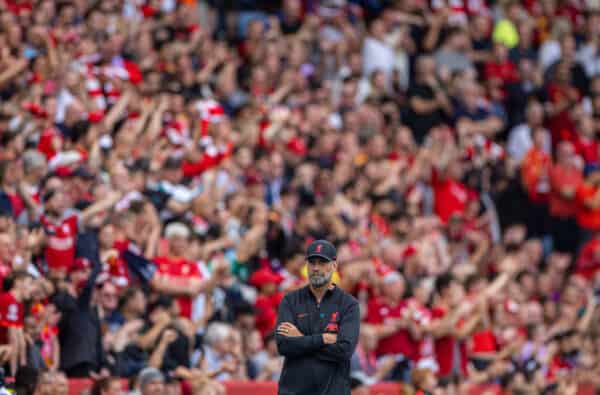 Which all leads me to think that, on the back of a season when Liverpool scored a club-record 147 goals, kept 32 clean sheets, won two out of three cup finals and missed the title by a whisker, Jurgen Klopp knows far more than me and is the best man to decide when he needs to sign a midfielder and who that should be.

He could probably sort out the cost-of-living crisis too if he had to, although come autumn all the talk will be that Liverpool need a forward because if he thinks we’re winning the League Cup again without signing someone to replace Divock Origi and Takumi Minamino…

* Chris McLoughlin is senior writer at Reach Sport, publishers of the official matchday programme. You can order the Liverpool vs. Crystal Palace programme here.