Jurgen Klopp did not attempt to hide his disappointment at his Liverpool players after a lucky 2-2 draw at Fulham, insisting that they “had the wrong attitude.”

The Reds should have been fully up for their Premier League opener after missing out the title by a point last time out, but it was a shocking start at Craven Cottage.

Unlike the previous three opening days, Liverpool could not get the better of the Championship winners and instead were forced to battle from behind twice to draw 2-2.

It was a lucky result, too, with Fulham the better side for much of the game, and particularly throughout an abject first half as the likes of Roberto Firmino, Fabinho, Jordan Henderson and Trent Alexander-Arnold all struggled.

Changes in the second half, namely Darwin Nunez, Harvey Elliott and James Milner, restored some urgency, but Klopp’s post-match interview with Viaplay summed it up.

“We were nowhere near good enough. From the first second we didn’t find it in the game,” he said.

“I don’t think I’ve ever said it before, but we had the wrong attitude for this game. That’s how it is. 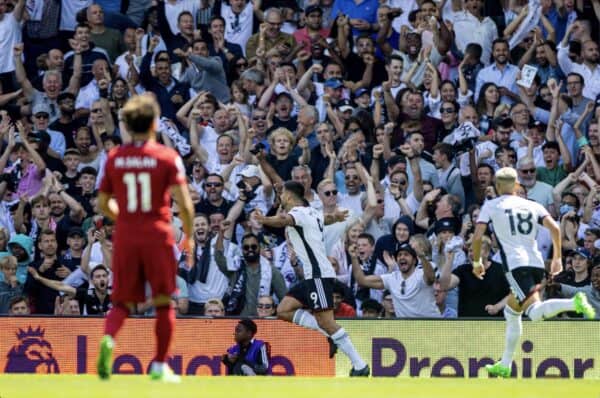 “We had to fight. All the times we had glimpses of football we were in front of their goal, we had bigger chances but they scored the goal and then the second goal we could equalise.

“Actually, the best news about this game is the result, that we get a point for this rubbish game.

“On so many positions we didn’t come close to our potential. That’s how it is, it’s my responsibility.

“I’m not exactly sure where I did it wrong in the last week, but between City and today something happened so we play this kind of game.

“We better not do that again.”

Asked about his half-time message to the players in his interview with BT Sport, Klopp agreed that it was a straightforward one, having told it how it is at the break.

“Come on, you cannot always hug the boys. We do that usually when they deserve it,” he said.

“We started the game in a specific way, which was opposite to how we wanted to start, complete opposite.”

The manager added: “We never had the momentum.

“We could have won the game, because we had the bigger chances obviously, but that would probably have been a bit too much today.”