Ahead of Liverpool’s 1-0 friendly defeat to Salzburg in Austria, Jurgen Klopp described the Red Bull setup as a “really interesting project.”

The Reds’ pre-season took a step up in intensity over the past week, with a 31-man squad heading to Saalfelden for a relentless training camp under the Alps.

Before their stay in Austria, there was a stop in Germany to play RB Leipzig, resulting in a 5-0 victory in which Darwin Nunez scored four goals.

It was much different on Wednesday night, with Benjamin Sesko’s first-half goal enough to clinch the win for a Salzburg side who are already two games into the campaign proper.

But the two-game tour saw Liverpool’s work with the Red Bull sides continue, with Klopp clearly among those at the club who appreciate the benefits of an informal partnership.

“What Red Bull is doing is a really interesting project, I have to say,” he told LFCTV ahead of the game.

“Again, they kind of change every year, they sell players but still a good team.

“It’s really interesting what they are doing. The football philosophy is not too far away from ours as well. 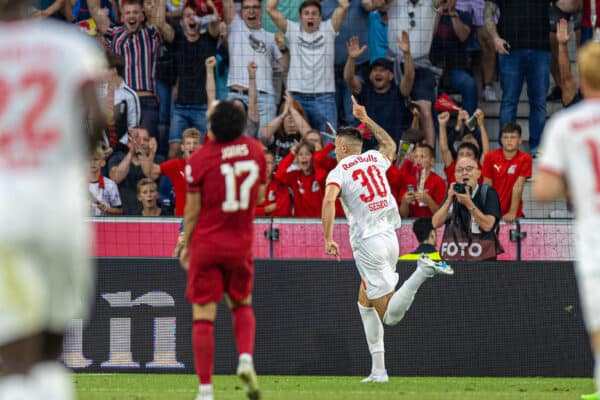 As Klopp notes, there is a clear identity in place throughout the Red Bull setup, which not only includes Salzburg and Leipzig but also the New York Red Bulls and Red Bull Brasil in Sao Paulo.

Within this, an emphasis on high-intensity, pressing football makes an ideal test for Liverpool during pre-season.

Furthermore, the shared ownership between those clubs – with FC Liefering also serving as feeder club to Salzburg – allows players and coaches to pass through the system in a deliberate manner, as was the case with Naby Keita.

Previously, Klopp has identified the likes of Leipzig and particularly Salzburg as being able to target players from areas of the world that are unattainable to Liverpool.

It is no surprise, then, that so many players have already stopped at Anfield after their time at Leipzig and Salzburg.

Perhaps it could even be Sesko who follows Keita, Ibrahima Konate, Sadio Mane and Takumi Minamino as the next to join the Reds from the Red Bull production line.