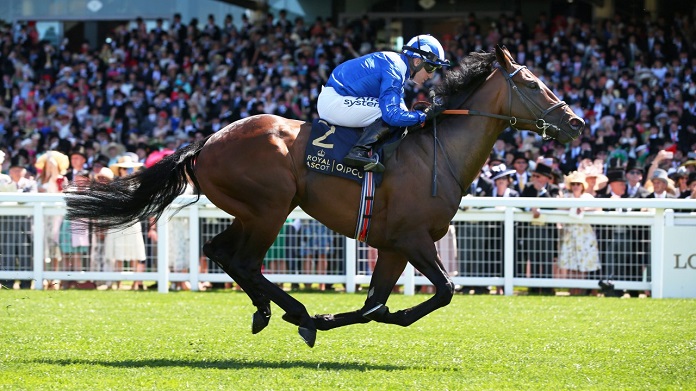 Epsom Derby winner Desert Crown is out of the Juddmonte International Stakes during the Ebor Festival at York next month. A foot problem, more serious that first feared, keeps Sir Michael Stoute’s Classic hero off the track with Baaeed now odds-on for victory.

After already missing the King George at Ascot because of the setback, bookmakers removed Desert Crown from their ante post betting on this extended 10-furlong Group 1 race. He was a course and distance winner after landing the Dante Stakes in style on the Knavesmire in May.

Unbeaten in three career starts, Desert Crown may still run again in the autumn, according to owner Saeed Suhail’s racing manager Bruce Raymond. “He is taking things easy at the moment and I know Sir Michael won’t be preparing him for York,” connections’ representative told the Racing Post.

“Beyond that we will see how things are, but hopefully he could run later on in something like the Arc or the Champion Stakes at Ascot in October.” Prior to the result of the King George, the absence of Desert Crown leaves a number of older horses at the head of the market.

Chief among those is William Haggas’ unbeaten Shadwell Estates colt Baaeed. He takes in the Sussex Stakes, one of the top Glorious Goodwood races, in en route to stepping up in trip for the Juddmonte International. Baaeed faces no more than eight rivals on Wednesday, 27 July but will concede weight for age for the first time in his career.

Prior to his Goodwood date, he is now odds-on at 10/11 with bet365 for victory at York. Newmarket handler Haggas was born in the White Rose county and always targets the Ebor Festival with some of his best runners. Baaeed could well break his duck in the race if staying the extra quarter-mile as expected.

Two of the last four renewals of the Juddmonte International went to the John Gosden team. He saddled Mishriff alongside son Thady to an impressive victory in this last season. However the five-year-old performs in the King George under James Doyle, a defence of his crown at York races in August is also on the agenda.

Mishriff was an arguably unlucky neck loser in the Coral-Eclipse at Sandown prior to his Ascot date. Ahead of that, bet365 cut him to 5/2 in their Juddmonte International odds. Mishriff isn’t the only globetrotting older runner with an entry either.

Joseph O’Brien won this race twice as a jockey, so could bid for victory in it as a trainer with State Of Rest. A Group 1 winner in the USA, Australia, France and at Royal Ascot in the Prince Of Wales’s Stakes last time out, York fits in nicely before the Irish raider jets off Down Under again this autumn.

State Of Rest varies quite a lot in price on the top betting sites from between 8/1 up to 14/1. Bar one three-year-old and these elders, there’s 16/1 and bigger available for the rest of the early closing entries. The Juddmonte International betting will be shaped by this Saturday’s Group 2 York Stakes over course and distance, plus the King George and Goodwood results.

Vadeni reckoned best of the three-year-olds

Eclipse winner Vadeni could return to the UK for this after his big success at Sandown Park races earlier this month. French trainer Jean-Claude Rouget now has the backing of powerful owner the Aga Khan giving him horses like this following the retirement of Alain de Royer-Dupre.

By the time that the Juddmonte International comes around, three-year-olds only get 7lb weight for age from their elders. Vadeni received a 10lb allowance last time out, so Mishriff is 3lb better off. This explains why he’s as big as 8/1 in places to confirm the Eclipse form.

Team Gosden could also run Nashwa getting the maximum weight for age and sex allowances here. She has a very easy assignment on paper at Goodwood as the Nassau Stakes on Thursday, 28 July has already cut up. Epsom Oaks third and Prix de Diane winner Naswha ranges from 9/1 to 16/1 with bookies.

Those Juddmonte International odds will only shorten if she obliges at the Glorious meeting in the meantime. Other three-year-olds will notable entries here include Godolphin’s Irish 2000 Guineas winner Native Trail and Prix Eugene Adam scorer My Prospero.

Recent winners of the Epsom Derby seem to have had more than their fair share of bad luck after landing the premier Classic. We’ve yet to see much if anything significant at all from the progeny of Harzand and Wings Of Eagles.

The latter was a fluke winner like Aidan O’Brien stable companion Serpentine, who has been gelded this year. Another old Ballydoyle inmate, Anthony Van Dyck meanwhile, picked up a fatal injury in the Melbourne Cup. Fortune doesn’t favour the brave after Epsom.

Masar missed a year and wasn’t the same horse, while fellow Godolphin Derby winner Adayar followed-up in the King George. He hasn’t won since though, and missed intended targets when remaining in training this season. This Epsom curse is of major concern as winners are supposed to enjoy post-racing careers as stallions at stud producing tomorrow’s thoroughbreds.

On breeding, the Juddmonte International trip is no problem for Baaeed. Mishriff is a real mile-and-a-quarter specialist, however. Vadeni and State Of Rest could add a real international flavour to the big race on the opening day of the Ebor Festival, Wednesday, 17 August. I can’t resist an each way bet on Joseph’s horse.