It still seems unlikely that Liverpool will end the transfer window with a new midfielder, but the profile of signing Jurgen Klopp wants has been outlined.

There is just over a week remaining of the summer window and calls for another signing at Anfield before 11pm on September 1 have been amplified.

While it has long been deemed a priority by supporters, journalists on Merseyside are now reinforcing the belief that, following a host of injuries and a dismal start to the campaign, a new face is required.

Naby Keita has joined the list of absentees along with Thiago, Alex Oxlade-Chamberlain and Curtis Jones, leaving five senior options in midfield including natural forwards Harvey Elliott and Fabio Carvalho.

The insistence earlier in the summer that Klopp was happy with his midfield options was, of course, undermined by the pursuit of Aurelien Tchouameni.

And the Times‘ Paul Joyce has now detailed the type of midfielder Klopp would “ideally” want brought in before deadline day, with it “clear that [he] would like to strengthen if the right player was available.”

“What the right player with the right profile looks like is interesting. Signing a body – anybody – is nonsense,” Joyce writes.

“Ideally, Klopp wants a No. 8 who can also play as a No. 6, but it has to be someone who is going to play now and also when the cavalry returns.” 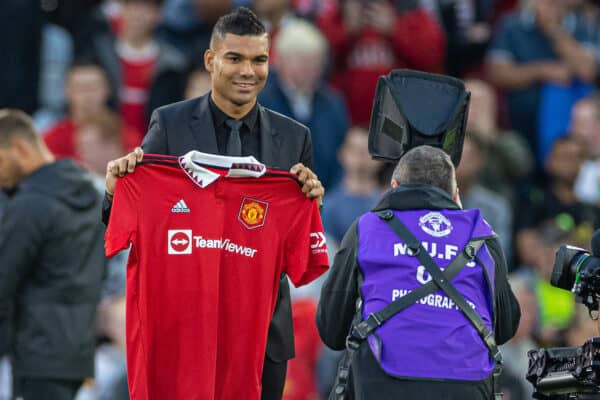 Joyce used Casemiro and Amadou Onana as two examples of players Liverpool would not have pursued.

Casemiro, who joined Man United from Real Madrid in a £70 million deal, is described as “not in the right position, not at the right price and, at 30, not the right age.”

Meanwhile, for Everton new boy Onana, who arrived from Lille for £34 million, “it will take time for him to get up to speed.”

It is eminently difficult to find a player to fit this profile, of course, particularly if the long-term plan is to challenge for Jude Bellingham when he departs Dortmund as expected next summer.

But it may not be impossible, with the likes of Konrad Laimer, Florian Neuhaus and Fabian Ruiz among those who could be available – here, we have listed 10 possible targets for Liverpool.