Liverpool finished a point behind champions Man City in the Premier League last season, and Jurgen Klopp has explained one thing his side can do if they’re to beat them to the chase in 2022/23.

It was the second time City have beaten the Reds to the title by just one point in the space of four years, with Liverpool left to regret the points they had dropped earlier in the season.

Despite beating them in the Community Shield last month, Klopp’s side are already playing catch up with City in the league, having been held to a draw by Fulham in their opener. City, meanwhile, have beaten West Ham and Bournemouth in their first two matches.

Chelsea, Brentford, Brighton, West Ham, Tottenham, Leicester and Man City all took points off Liverpool in the last campaign, but it’s the matches against Pep Guardiola’s side where Klopp wants to see improvement.

Had Liverpool won either of the draws they played out against City last season, they would have gone on to win the title, and the Liverpool boss feels the Reds must beat the champions at least once if they’re to stand a chance of finishing above them. 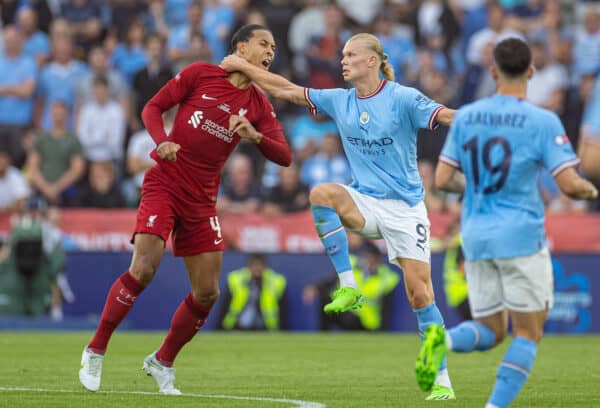 “We could have got the points against City last year when we played them, for example, and we didn’t,” Klopp told Sky Sports.

“We shared the points, which is okay, but if you want to be ahead of them, I think it makes sense that we win at least one of the two games, and that’s how it is, but it’s not only City.”

Klopp also elaborated on the club’s reluctance to sign a midfielder for the time being, despite admitting “the situation has changed” in recent weeks due to injuries.

Thiago, Alex Oxlade-Chamberlain and Curtis Jones are all out of action, with many supporters keen to see the club go back into the transfer market.

There have clearly been talks regarding the addition of another midfielder, but Klopp continues to insist “the right player” is currently unattainable. 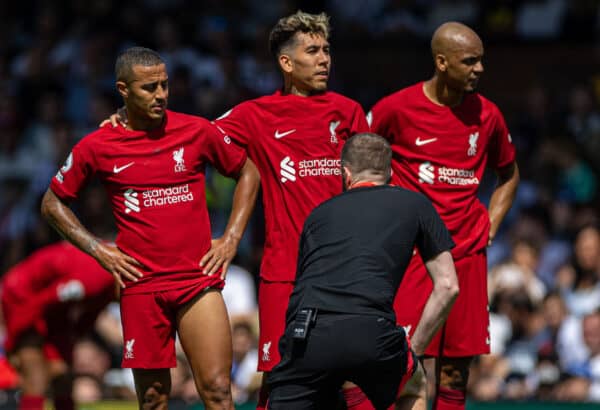 “There are money reasons and contractual reasons which, most of the time, go hand-in-hand.

“It’s not that we deny signing a player if we have a problem with injuries, for example, but it is a complete different situation to the beginning of the pre-season when everybody told me we needed a new midfielder and that was about the kind of midfielder. That is a completely different discussion.

“We didn’t need a different kind of midfielder but if the right midfielder would have been available, we would have gone then as well.

“Now the situation has changed slightly: we have more injuries, that’s true. But it can still only be about the right [player] and that is not easy. It is nothing to do with that it is now August already and at the end of August, the transfer window closes.

“It’s all about solutions and only one of these solutions is the transfer market, all the other solutions are here.”