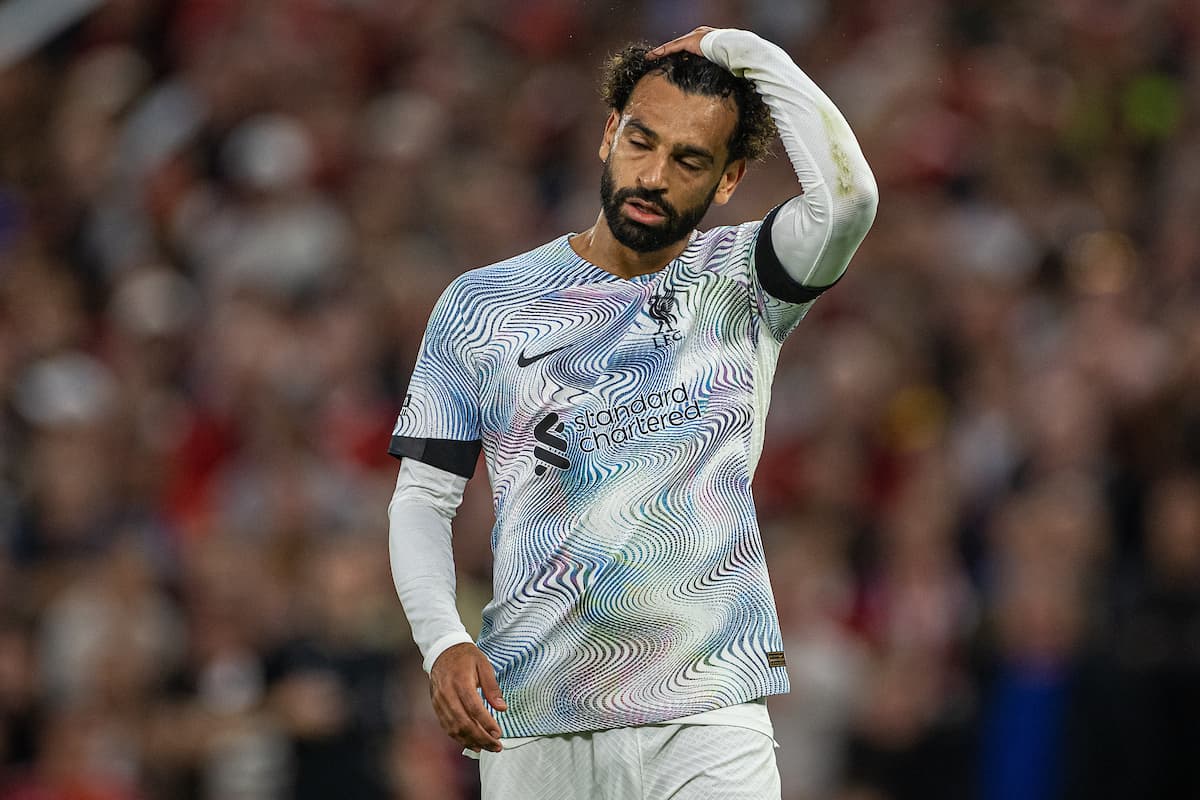 After another dismal performance, Liverpool are still yet to win a Premier League game this season, falling to a 2-1 defeat to Man United on Monday night.

The Reds’ poor start to the campaign hasn’t been helped by an extensive injury list, but that was not to blame for a simply abject display at Old Trafford.

Jurgen Klopp‘s side were outfought from the off by Erik ten Hag’s side, with supporters lamenting a performance that was nowhere near usual standards.

How worried should we be about Liverpool?

A night where pretty much everything that could go wrong did. #LFC’s worst performance since Watford 2020. Can talk about tiredness from last season & injury issues, but doesn’t explain the striking lack of cohesion, desire & failure to do the absolute basics. So, so poor.

Liverpool at risk of embarrassing themselves. Blueprint entirely lacking; a game in which newly-signed-contract Salah should be leading the charge. Poor, all round.

What’s most worrying about this is it feels just like that period two seasons back in January when we just lost every game. Don’t mind losing or drawing but there is something wrong with the mindset at the moment.

That was a mournful soft-rock ballad, not the normal heavy metal Klopp soundtrack.#LFC undergoing a big identity crisis right now and that makes *your* theory as to why the correct one

The body language of this team is so, so weird. It’s all so passive and limp. They don’t even look angry.

Difficult night at Old Trafford. Losing is one thing but the worry is that Liverpool simply didn’t work as hard as Utd or show anywhere near as much desire. Frustrating that even after getting one back Liverpool didn’t try to penetrate enough in the final few minutes. A lot to do

A lack of fight, composure and a real sense of complacency. Not what you associate with Jurgen Klopp’s Liverpool. Tired minds and bodies in addition to injuries, yes, but that can’t be an excuse for what we’re seeing.

Remarkable to see Liverpool so comprehensively outfought and out-thought tonight by a team they were so far ahead of last season. Klopp can keep saying there’s no issue with his midfield, but that was so clearly where the game was lost, for me.

A week to prepare that? Can’t be right. We are in desperate territory here.

Abject from Liverpool. No Fabinho was a crazy decision. Midfield looks old & is being pulled all over the place. Van Dijk has been really slack in the first three games. And Alexander-Arnold has been shocking. How it’s only 2-0 is remarkable. They’re being bullied.

36-year-old Milner running channels beyond striker shows depth of midfield issues for Liverpool. Very willing, but United would be happy to take that for rest of evening.

A late goal from Mohamed Salah gave Liverpool hope of securing a late point, but in truth, United were far superior throughout.

Fabio Carvalho‘s cameo off the bench was one of the very few positives to come from the game, with the summer signing surely now in contention for a start against Bournemouth on Saturday.

Liverpool need to improve, and they need to do it fast.