After three games, Liverpool are still yet to register a league win this season, and speaking after the 2-1 defeat to Man United, Jurgen Klopp admits he “is concerned” about his team.

The Reds went into the game at Old Trafford as big favourites, facing a United team who lost their opening two matches to Brighton and Brentford.

But after another slow start, and the seventh consecutive game in which they’ve fallen behind, Klopp’s side were second-best throughout.

With 11 first-team players currently unavailable, many fans are calling for reinforcements before the end of the transfer window, but it was the uncharacteristic lack of fight and character that supporters will be most concerned by.

Klopp has admitted he is “concerned” by Liverpool’s current “situation,” but also claimed he felt they could have won at Old Trafford. 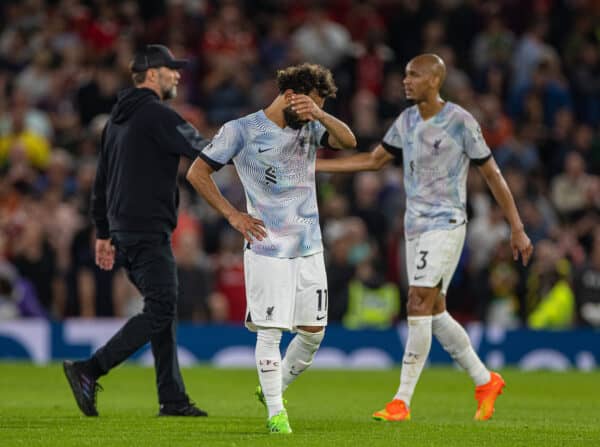 “We are in a tricky situation injury-wise, we got through the week with 14, 15 senior players available and now have to make sure they don’t get injured,” Klopp told Sky Sports.

“We should have won this game, I know it sounds ridiculous but that is how I saw it.

“I am concerned about our situation, but that is how it is. We prepare for Bournemouth and Newcastle now.”

Alarmingly, some Liverpool players were involved in disagreements on the pitch, with James Milner‘s exchange with Virgil van Dijk caught on camera after Jadon Sancho’s opener.

Klopp says he’s not worried about the harmony in his squad but did admit that his team “were not 100% ready” to face their arch-rivals.

“When you are in a game like this fighting, these guys talk to each other and on the pitch it is a different conversation,” Klopp added.

“It was not a perfect performance, it was clear United would get out of the blocks but we were not 100% ready.

“We had to keep chasing the game and that is not what you want to do. It makes it difficult with their counter-attacking threat. The second goal is hard to take, it was offside, but we have to work with it.”

Liverpool at least now have two home matches to look forward to, with Bournemouth travelling to Anfield this Saturday, before a clash with Newcastle next Wednesday.

Klopp is adamant that he and his team will do everything they possibly can to get their campaign up and running as soon as possible.

“We will try absolutely everything that every Liverpool supporter will expect, we will fight for our lives,” he told BBC Sport.

The Reds need points, and they need them fast.