Liverpool are heading into the third year of their deal with Nike, which is worth an initial £30 million per season, but narrowly missed out on an extra £4 million at the end of the last campaign.

However, the five-year agreement with Nike was struck in the knowledge that the deal would include a number of monetary bonuses based on the club’s achievements in the coming seasons, and could end up earning them £60-£70 million a year.

Plenty of those bonuses were forthcoming in 2021/22, with Jurgen Klopp‘s side two victories away from securing an unprecedented quadruple of major trophies last season.

According to James Pearce, writing in The Athletic, Liverpool received a £2 million reward for reaching last season’s Champions League final, but would have received £6 million if they’d won the competition as well as the Premier League. 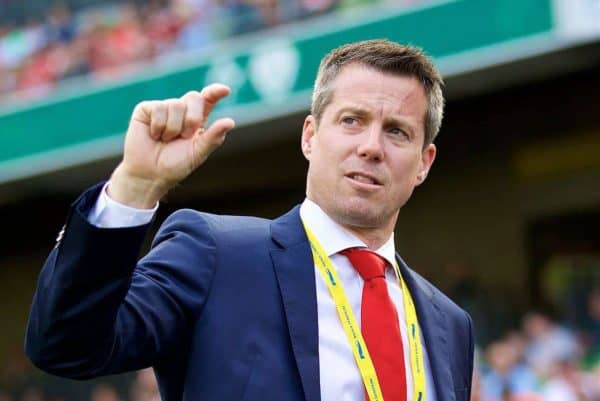 Liverpool CEO Billy Hogan says the club’s relationship with Nike “is off to a great start” and is happy with current set of kits.

“The merchandise and retail industry was impacted negatively by COVID but as we talked about earlier, digital and E-commerce growth during that period was significant,” Hogan told The Athletic.

“Even with the challenges of COVID, we’ve had record selling kits and it probably could have been more given our shops were closed, and we didn’t have matchday attendances.

“Overall, the relationship with Nike has got off to a great start. We’re now entering year three and hopefully, people will agree we’ve got three really strong kits out this season.

“The new home kit has been well received, with really strong sales out of the gate. We’re pleased with where we are with Nike and looking forward to the future.”

Liverpool’s home and away kits for the upcoming campaign have been released, but the third strip is yet to have been unveiled, despite leaks of a dark green jersey online.

Meanwhile, Hogan also revealed the club are open to selling the naming rights for the Anfield Road End, with work on its expansion due to be completed in time for 2023/24.

“It’s certainly something that we will consider,” he continued.

“We didn’t for the Main Stand; we may for Anfield Road. We wouldn’t say no to it but it’s not something we’re actively pursuing currently.”