How Barcelona have convinced Jules Kounde to stall on Chelsea switch 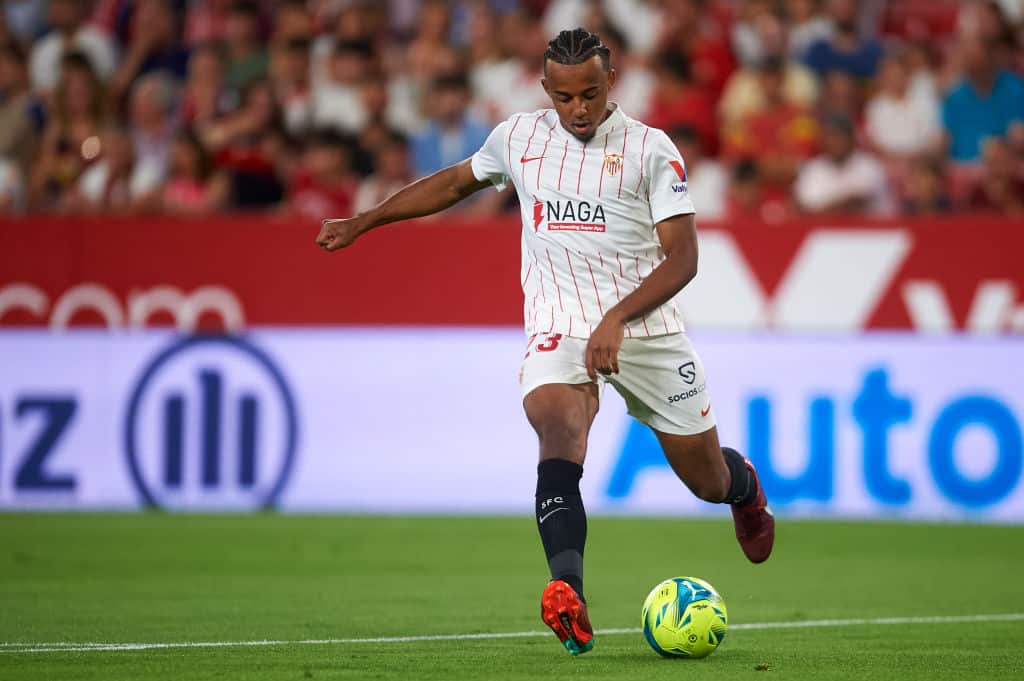 A fresh update on the ongoing transfer saga surrounding in-demand Sevilla star Jules Kounde has come to the fore on Thursday.

The name of stopper Kounde, of course, has taken its place front and centre in the headlines across the summer to date.

This comes with the French international having been added to the transfer wishlists of not one, but two heavyweights of the European game.

The clubs in question? Barcelona and Chelsea.

The latter, of course, have been keen on Kounde’s services for over a year now, with the Blues’ fruitless pursuits of both Matthijs de Ligt and Nathan Ake this time round having seen the 23-year-old take his place back atop Thomas Tuchel’s shortlist of defensive targets.

Abdessamad Ezzalzouli and Jules Koundé during the La Liga Santander match between Sevilla and FC Barcelona at the Estadio Ramon Sanchez Pizjuan on December 21, 2021 in Sevilla Spain (Photo by David S. Bustamante/Soccrates/Getty Images)

Barca, though, now eyeing reinforcements at the back after sealing impressive deals for both Raphinha and Robert Lewandowski, have too set their sights firmly on the talented Kounde.

Not only that, but word stemming from the Spanish media has pointed towards the Camp Nou as the Frenchman’s landing spot of choice.

And such suggestions would certainly appear to line up with the latest reports doing the rounds in Catalunya on Thursday night.

It is widely understood that Chelsea, this week, tabled a big-money opening offer for Kounde’s signature, in the hopes of striking a definitive agreement before Barcelona were afforded the opportunity to activate their 3rd economic lever of the summer.

The Blaugrana, however, appear ready to take advantage of the defender’s preference to link up with Xavi’s troops, to pip Chelsea to the post for the 2nd time in a matter of weeks (after Raphinha).

As per Cat Radio, those in a position of power at the Camp Nou advised Kounde to accompany the rest of Sevilla’s squad to Portugal today, for the Andalusian outfit’s pre-season tour.

This comes after the 23-year-old was not afforded a call-up by Julen Lopetegui, under the assumption that he was on the verge of a Chelsea switch.

Kounde, in turn, did indeed make his way to the Algarve, in a clear as day ‘come and get me’ message to Barcelona.

Are Manchester United and Chelsea set to do battle over Bayern Munich defender this summer?