Harvey Elliott has described his latest Liverpool contract as a signal he is “more of a first-team player,” as he sets his sights on a career-long stay at Anfield.

Just over a year on from last putting pen to paper, Elliott has signed a new five-year deal with Liverpool, tying him to his beloved club until 2027.

It is a marker of the progress he has made since joining from Fulham in 2019, and having taken up the No. 19 shirt this season he is poised for a more prominent role in Jurgen Klopp‘s side.

And speaking to LFCTV upon the announcement of his deal, Elliott reflected on his journey so far and outlined his desire to stay for the rest of his career.

“It’s why I’ve come here, to be honest, to make sure I establish myself in this team and play as much as I can for Liverpool.

“That’s all I want to do, I just want to put the shirt on and go out and play, just enjoy myself.

“I remember days when I was playing in the back garden with a Liverpool shirt, scoring goals, pretending to be these players, now I’m playing with them.

“It’s memories that I want to write myself and look back on in years to come and think ‘what a dream, I’ve dreamt my dream and achieved it’.” 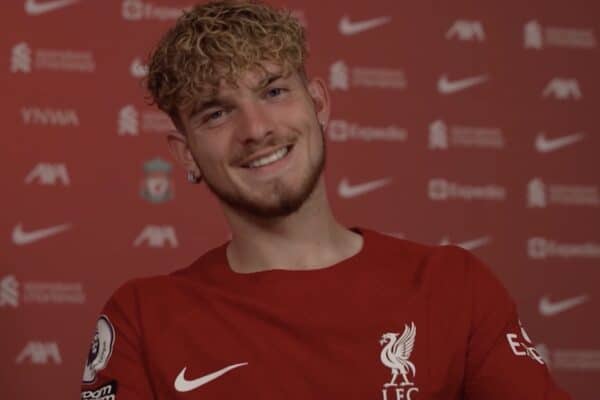 Were it not for a serious ankle injury suffered at the start of last season, Elliott would be closer to the 50-appearance mark already, but as it stands he has made 22.

It is still a healthy tally for a player who only turned 19 in April, and the teenager already sees himself as more established, with this latest extension proof.

“I feel like it’s not more pressure on me, but it’s more of a situation where I’m more of a first-team player, in a way, than last year, obviously coming back from loan,” he explained.

“I didn’t play, the first season I joined, as much as I have done these past couple of years.

“It feels more of a contract now, a first-team contract, in terms of how it’s going to run in the next couple of years.

“I’m just excited to keep putting on a shirt, to keep playing. I’m so excited and just can’t wait to get out there again.”