Liverpool find themselves short of options up front with two injuries and a suspension, but a “realistic target” for Diogo Jota‘s return could provide a boost.

Jota has been sidelined since the first weeks of pre-season, having suffered a recurrence of a hamstring injury during training on the Asia tour.

It has proved a major setback for the Portuguese, who has so far missed five weeks of training and eight games including friendlies, while Jurgen Klopp struggles for options in attack.

On Monday night, Darwin Nunez was shown a straight red card which will now rule him out for three fixtures, while Roberto Firmino was absent for the 1-1 draw with Crystal Palace as a precaution.

Mohamed Salah led the line following Nunez’s dismissal, with 17-year-old Bobby Clark the only other alternative on the bench.

Nunez is set to miss upcoming clashes with Man United, Bournemouth and Newcastle, while it is now doubtful whether Klopp will start his No. 27 in the intensity of the Merseyside derby on his return game.

It would certainly help if Jota was back fit and available, and GOAL‘s Neil Jones claims it is a “realistic target” for the striker to return for the meeting at Everton on September 3. 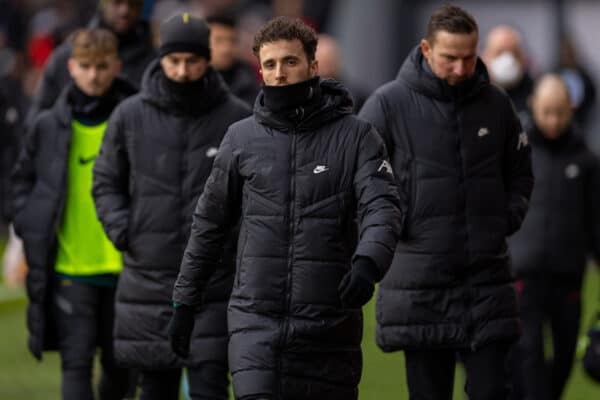 Previously, it had been reported that Jota was expected in full training by mid-August, though the player himself explained at the start of the month that he would be absent for “a few more weeks.”

That would suggest involvement with the rest of the squad by the end of the month, but whether or not he will be up to speed in time for the trip to Goodison Park is unclear.

There is hope, meanwhile, that Firmino will be available for the meeting with Man United on Monday, with Klopp telling Viaplay after the draw with Palace that the No. 9 “will be fine probably from Wednesday on.”