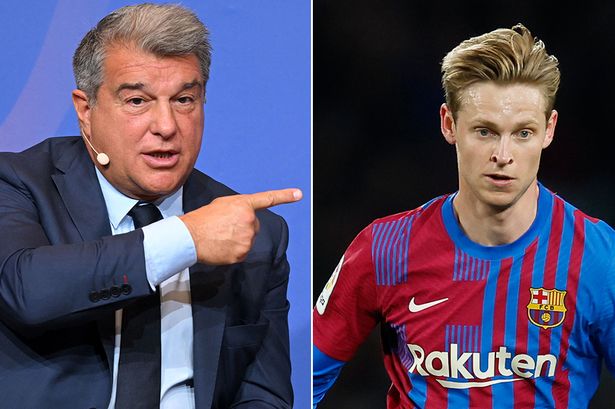 Barcelona have reportedly found evidence of criminality in Frenkie De Jong’s contract, and are eager for the Dutchman to revert back to his previous previous arrangement.

His current terms were negotiated by the previous board, headed up by former president Josep Bartomeu who was ousted last year following years of gross mismanagement and fraudulent dealings.

Frenkie De Jong, who has been heavily linked with the exit this summer, is keen to remain at the Nou Camp despite the club reportedly open to selling him.

With the Blaugrana still unable to register the influx of new signings until they balance their wage bill, De Jong’s sale would command both a substantial transfer fee as well as cutting £470,000-a-week off their salary commitments.

However, it now seems as if the current board are trying a new tactic which could achieve two things; keeping De Jong at the club while simultaneously reducing his wages.

After finding evidence of criminality in his current contract, which was extended to 2026 last year at a reduced salary, there remains £15.2million outstanding to be paid over the next four years of his contract.

Barca are now keen for the 25-year-old to to revert to the original terms of the agreement,  which he signed back in January 2019.

🚨 EXCLUSIVE: Barcelona told Frenkie de Jong on July 15 they have evidence of criminality around contract given by old board + cause for legal action vs all involved. #FCBarcelona asked him to annul deal & revert to previous terms @TheAthleticUK #MUFC #CFC https://t.co/g1at9ZqYL0

There are also separate claims that De Jong’s representatives HMC Sports Management may be implicated in the alleged criminality.

Manchester United, who have registered strong interest in the midfielder throughout the window, had an offer accepted last month but outstanding payments owed by Barcelona prevented the deal from going through.
While both Chelsea and United are said to be willing to pay for the deferred wages, it looks as if the La Liga runners-up are intent on finding a way round having to pay for it themselves.

Legal action against one of your own players is certainly not a good look for the club, and despite president Joan Laporta and manager Xavi Hernandez insisting they want the Dutchman to remain in Catalonia, this latest development may well persuade him to head for the exit.