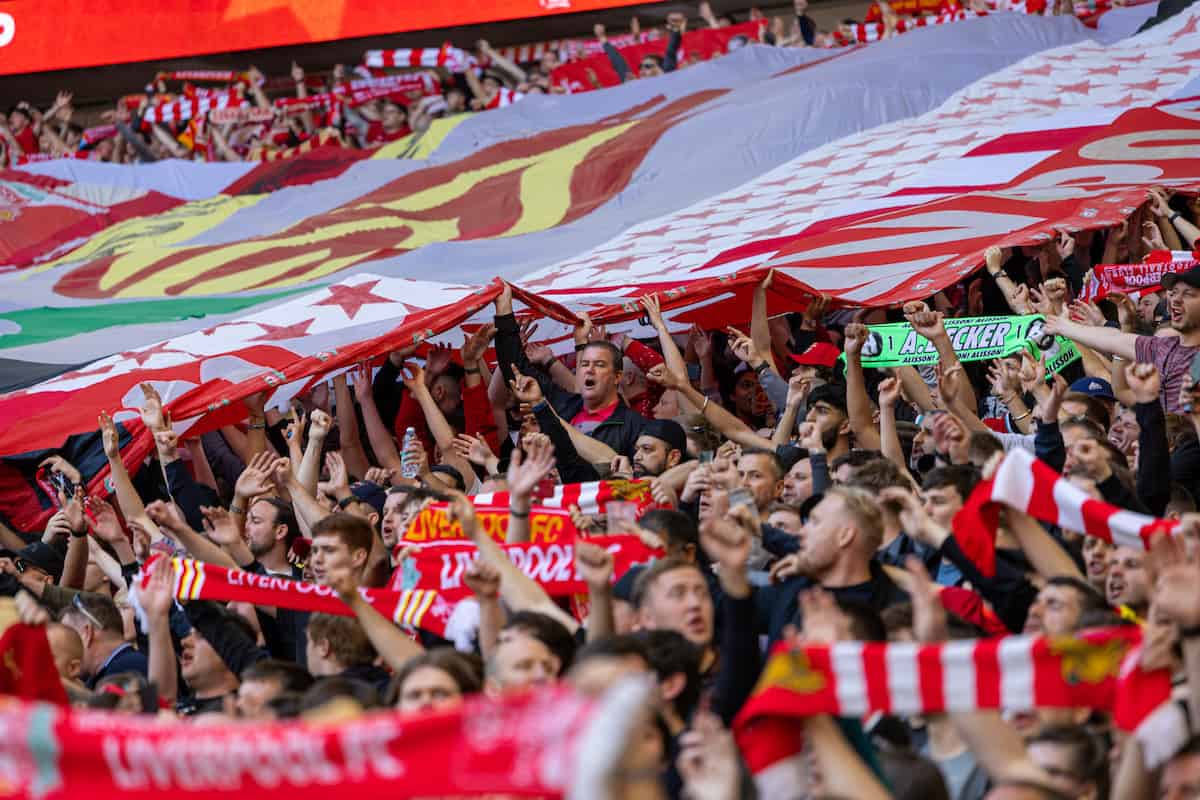 The demand for Liverpool tickets always exceeds supply and fans hoping for a piece of good fortune in a members sale on Friday were given plenty of headaches in their attempts to do so.

Anfield’s current capacity is 53,394 and when you factor in away tickets, hospitality and season ticket holders, there is not enough remaining to cater to the hundreds of thousands of members.

The club opted for a ballot scheme for Premier League home games in two different windows, and those successful for the first half of the season were able to purchase tickets on Thursday.

On Friday morning, any tickets that remained for nine games went on sale for those that were not successful in the ballot, and tens of thousands joined the online queue.

One example saw a fan join with a queue number of 21,526 and over the period of an hour the number ahead in the queue only moved to 20,306, with tickets all sold out at that point.

The dreaded ‘over an hour’ estimated wait time all but seals your fate that tickets are not to be forthcoming and it does create plenty of frustration with fans hoping to secure a ticket.

Why has it literally become impossible to get a ticket to a Liverpool game? ?

I mean that’s the selling point but when there hundreds of thousands of members, if not millions (globally) the “priority” is gone.

I’m a member. Never been successful in the ballots. Got tickets a few times the last few seasons but today in the unsuccessful sale I got nothing. pic.twitter.com/FNxbWlpzBb

Can’t believe people want to go back to this rather the ballots by the way. Sat in a queue with 200,000 other people and it going at snails pace. No idea if you’re going to get any tickets or not. At least the ballots save you a wasted morning if you’re unsuccessful.

0 from 9 in the ballot.
Best part of 2 hours in the queue for the remaining crumbs.

0 tickets for me and my dad.

I know demand outdoes supply for @LFC tickets. But I’ve got to be honest, this is all becoming exhausting.

Then to see touts flogging tickets for hundreds… ?

Hasn’t moved in 90 minutes, joined it at 7:20am, people who joined later had better queue positions, fuck all to show for it. Fuck right off pic.twitter.com/REhaI32gV3

Attempting for tickets in the unsuccessful ballot is absolutely pointless. 30,000+ in queue. Balls

It seems to get worse and worse every season for lfc to get a ticket and yet I’ll continue to be a mug & keep renewing my membership. I guess I’ll try my luck in the local sale (if there is any) & then start this chaos again at the next ballot ?

Got to be a better way of doing tickets than this. Ballot seems most fair in some ways but then some loyal fans inevitably miss out. Bulk sales just end up with more people turning to touts for tickets and then you’ve got people who purchase memberships and never have a hope.

Imagine waiting 2 hours for Liverpool tickets, getting 2 in your basket, putting in payment details and hitting check out, only to be put into another queue for 30 mins to process payment and finally, once at the front of that queue “Transaction error” ? #LFC #LFCTickets pic.twitter.com/TmiHxaHqs4

Easier to get Glastonbury tickets than Liverpool tickets #lfc

Twitter fury around the ballot sale today was inevitable, 150k surplus demand yet I’d be surprised if there were more than 1000 tickets up for grabs

The queue for Liverpool tickets is ridiculous ?

75,000 in the queue for the UNSUCCESSFUL ballot. Absolute joke there is that many even on this yet all the ticket tout companies have thousands for hundreds of quid #LFC #LiverpoolFC @LFC pic.twitter.com/Ha1JbbZgRL

The success rate was only ever going to be a small percentage on Friday but a lot of the frustration will lie with the fact that tickets inevitably land in the hands of touts and are then sold on at a significantly higher price.

Liverpool will never be able to keep all fans happy such is the demand but the closed system all but renders new memberships meaningless, aside from the club’s balance sheet, as tickets feel nearly impossible to acquire without a history of previous credits.