Why not us too? The question Liverpool have to turn on its head – Liverpool FC


Liverpool have left the door ajar and any nosey opposition can take a peek before leaving it more exposed than when they found it. It leaves the Reds with a point to prove.

Three games in and only two points on the board, the early weeks of the 2022/23 season have offered little in the way of solace to an off-balance Liverpool and left them with a great deal of self-reflecting to be done before moving forward.

These are peculiar times for Jurgen Klopp and his players; draws against Fulham and Crystal Palace and now defeat at Manchester United, this isn’t how the script was meant to be. A total of 270 minutes, plus injury time, of Premier League football has been played, during which Liverpool have not held the lead in any of their three games for even as much as a minute. We have spent uncomfortable sections of these games chasing our tail.

In all three of Liverpool’s games, so far, they have dominated large swathes of proceedings in terms of possession yet been unable to make the most of the ball in the final third. The goals we have conceded have – in the main – felt mostly avoidable. Gifts have been handed out; it has all seemed too careless, not only in defence but in all departments.

Circumstances have undeniably conspired against us, as Klopp oversees an extensive injury list, while his big summer signing also sits in the stands due to an entirely self-inflicted three-match ban. Cohesion is proving a difficult commodity to attain. 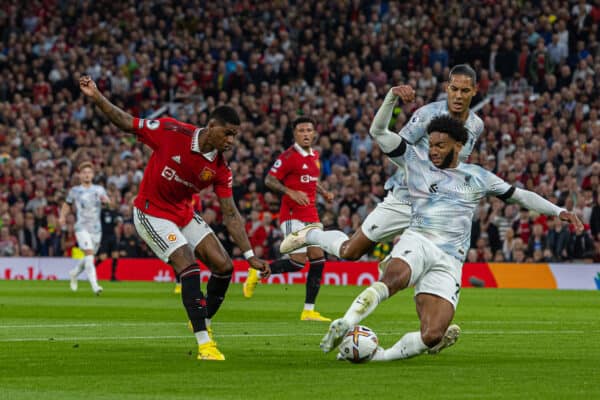 Three games and three different central defensive partners for Virgil van Dijk, while Ibrahima Konate is still to kick a ball in anger this season. Thiago, Naby Keita and Curtis Jones are unavailable in midfield, at a time when neither Jordan Henderson nor Fabinho are finding the higher gears, plus we have no Diogo Jota in attack, which allows the off-the-pace Bobby Firmino and Mohamed Salah too easy a ride.

On Monday night, the biggest positive was the effervescent input of Fabio Carvalho after his introduction from the bench. The bolder move for Klopp to make would have been to have thrown him in from the start, as Erik ten Hag essentially had a whole week to prepare his Harry Maguireless defence to face the certainty of a Salah, Firmino and Luis Diaz triumvirate.

Still, an easier task said than done, the home team worked relentlessly to shut off any opportunities that dropped Liverpool’s way, to the point that apart from our eventual consolation goal our best chance came from the erratic Bruno Fernandes when he had to rely upon a teammate to save his blushes on his own goal line.

Sometimes it simply isn’t your night and while this game can lay claim to falling into that category of loss, there is more to it. Currently, we aren’t helping ourselves enough and high levels have – perhaps understandably – dropped. There are very few Liverpool players right now that aren’t in need of locating their nearest mirror and taking a long, hard look in it.

I don’t subscribe to hyperbole; there are 35 Premier League games to go, and Liverpool aren’t suddenly a poor team, but we are idling along a bit of a plateau at the minute. Injuries, while a valid issue to illuminate, haven’t stopped Klopp naming a trio of highly capable line-ups to face Fulham, Crystal Palace and Manchester United, line-ups that should have secured a victory or two.

I mentioned it after the Palace game, but there is a growing sense of a hangover in response to the final two games of last season. Have we all really dealt with the blow of missing out on both the Premier League title and the Champions League? 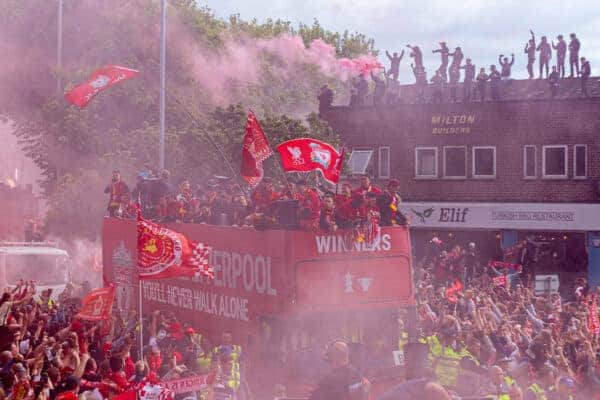 I’m not so sure we have and it’s OK to admit it stung. The more we struggle to find our mojo across these formative weeks of the new campaign, the more the images of that open-top bus parade in May will offer up visages of forced joviality, the players and coaching staff projecting the message that all was still well, without facing the pain of the situation.

I’m not saying we shouldn’t have done it and it was very right to pay tribute to one of the most extraordinary seasons in the history of the club, but it has arguably pushed the angst below the surface. It can’t always be a case of ‘We Go Again’, at least not without dealing with the demons first.

Part of this process is letting go. The last week of 2021/22 really should be seen as the end of a chapter, with Klopp and his players beginning anew this season on a fresh three or four-year cycle. Klopp’s contract extension shifted the horizon of the club, and we can’t be hanging on to what has passed. Acknowledge the impact, then look to the future. 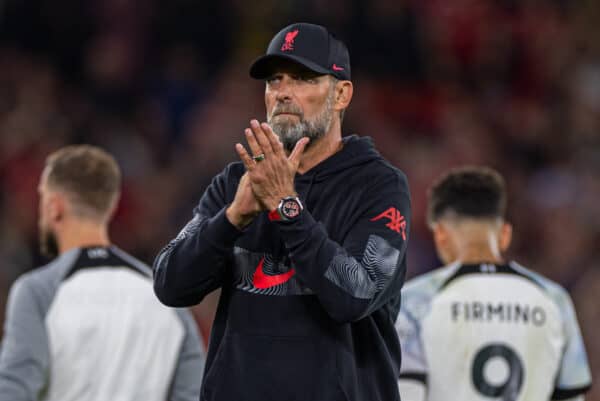 Klopp has won the lot at Liverpool, now time to reach out to do it all over again, casting off the components that are unlikely to be able to travel the distance a second time. Constant regeneration is what will see us prevail. 2022/23 shouldn’t be seen as a mission to avenge the eventual wrongs last time out, but instead viewed as the first steps of Klopp’s second great team scaling new mountains between now and 2026.

Saturday will see Bournemouth roll into Anfield. Brushed aside by Arsenal at the weekend, they will still be looking at our uncertainty and the point each gained by Fulham and Crystal Palace thinking why not us too?

For Liverpool’s part, they need to head on to the turf and show why not Bournemouth too. It’s not about proving points to anybody else, it’s about proving something to themselves.