Trent Alexander-Arnold sent out a simple message, with plenty of intent, after Liverpool’s Community Shield win, while James Milner opted for a more humourous angle on the victory.

For the third time under Jurgen Klopp, Liverpool contested the Community Shield and it was third time lucky as the Reds inflicted a 3-1 defeat on Man City.

Alexander-Arnold started the scoring with a perfectly timed first-touch finish, with Mohamed Salah adding his name to the scoresheet from the penalty spot before Darwin Nunez rounded it off.

Within that, there was plenty to enjoy, including Trent’s ‘shhh’ celebration, Thiago‘s masterclass and Nunez being overcome with pure joy after finding the net at the death. 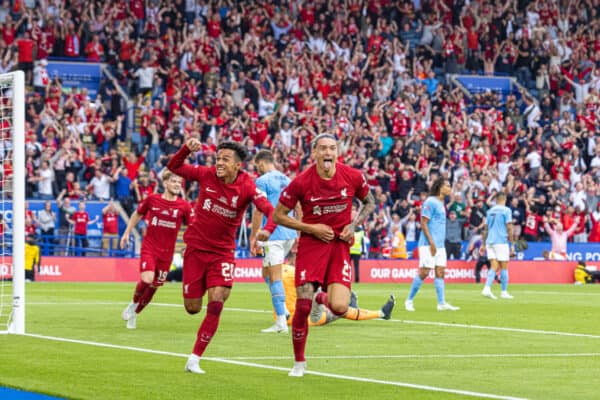 The victory is Liverpool’s first in the Community Shield since 2006 and adds another piece of silverware to those already collected under Klopp.

But it’s only the start for the Reds in 2022/23, and there was a simple ‘We’re ready’ message from the No. 66 after the celebrations in Leicester:

Milner instead went for a touch of humour after lifting the shield with his new beard, which may need to stay around longer than first planned:

It was the “perfect start” to what lays ahead for Nunez, Thiago, Jordan Henderson and Fabinho, the latter of whom all started together in midfield and look set to do so again at Fulham:

And there were plenty of smiles all around within the Liverpool camp after the first piece of silverware:

It’s another tick in the box for Liverpool and a welcome boost for the squad ahead of what is to be another long, taxing and unprecedented season.

For now, it’s to Anfield we go before all eyes turn to the start of the Premier League season.

Up the Community Shield-winning Reds!