The best (and worst) dressed at Andy Robertson’s wedding – as chosen by Virgil! – Liverpool FC


A brilliant photo of several Liverpool players suited and booted at Andy Robertson‘s wedding emerged last week, and Virgil van Dijk has been asked to pick the best dressed.

Robertson married long-term partner Rachel Roberts earlier this summer, with a number of his teammates invited along to the ceremony.

Captain Jordan Henderson shared a photo of the Liverpool players stood with Robertson at the wedding, which is believed to have taken place just before pre-season.

The photo went down well with Liverpool fans on social media, with debates taking place as to which player brushed up best.

That very question was put to Virgil van Dijk, who was one of the players there, on the one condition that he wasn’t allowed to choose himself.

“No, no, no, because that would be too easy,” Van Dijk told Liverpoolfc.com.

“I would say Hendo. I think he looked alright, so I have to give him the props.

“I think Thiago looked like a director of some football club a little bit! I told him that as well.

“But no, I think everyone looked very good in that photo and it was great to see everyone at that point as well, because obviously, we didn’t see each other for a couple of weeks.

“To have a good night together and have a nice little party and everything was great.”

Robertson’s wedding wasn’t the only one Van Dijk was invited to over the summer.

Nathan Ake, the Man City defender who is also Van Dik’s Netherlands international teammate, was another to tie the knot over the summer. 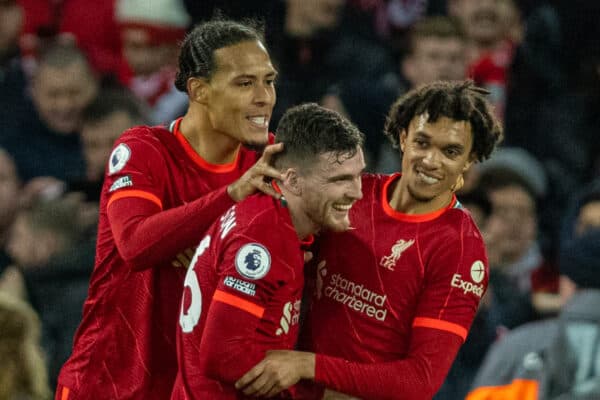 Van Dijk explained how the summer is peak season for footballers to get married, and said Robertson’s ceremony was a great opportunity to catch up with his Liverpool teammates during the off season.

“Yeah, it was great. If players are getting married, the summer is the wedding season.

“So I had an invite for Nathan Ake’s which was very good, and I really enjoyed that one, and the other one was from Robbo, really good.

“The Scottish humour is always good to be around! I really enjoyed the day, it was nice. There was a lot of love and happiness, and that’s something you just want to be around.”

We can’t argue with the Hendo choice, but poor Thiago!