Pep Guardiola has confirmed that first-choice centre-back Aymeric Laporte will miss at least the first month of the season following knee surgery.

Man City take on Liverpool in the Community Shield on Saturday evening, during an unorthodox pre-season that has seen them play just two friendlies so far.

Those came on a tour of the United States, with only 21 players featuring across wins over Club America and Bayern Munich.

That is partly due to the small size of Guardiola’s squad, with Raheem Sterling, Fernandinho, Gabriel Jesus and Oleksandr Zinchenko all departing this summer, but also issues for other players.

Chief among those is Laporte, who played more minutes than any other City centre-back last season but will now miss a lengthy period through injury – including the meeting with Liverpool.

“Laporte is injured. He had surgery after the last season,” Guardiola told reporters on Friday.

“He played the last two, three games [of last season] with an important injury, made an incredible effort, but of course, he could not continue to do that.

“He had surgery, so far he’s doing really, really well, but you have to be careful with the knee.

“I don’t know, we need the time, I think August he will be out, but maybe in September he starts to be with us. We will see.” 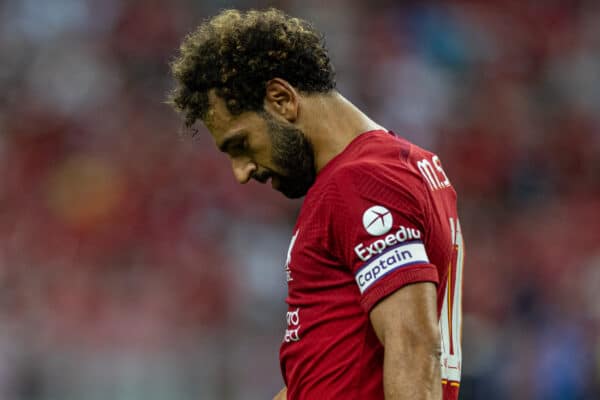 That leaves Ruben Dias, John Stones and Nathan Ake as senior centre-back options, with Stones not having featured yet this pre-season after missing the US tour for an unnamed reason believed to be vaccine status.

It stands to reason that Ake will partner Dias on Saturday, as he did against Bayern, though Guardiola has also used Kyle Walker and new signing Kalvin Phillips as out-of-position stand-ins.

Whoever starts will come up against a fired-up Mohamed Salah, with Guardiola under no illusions as to the No. 11’s threat.

“I’m not going to say something new about this player, because all of us in this room know him,” he said.

“He’s an exceptional player, an incredible threat, a top goalscorer. We know his quality.