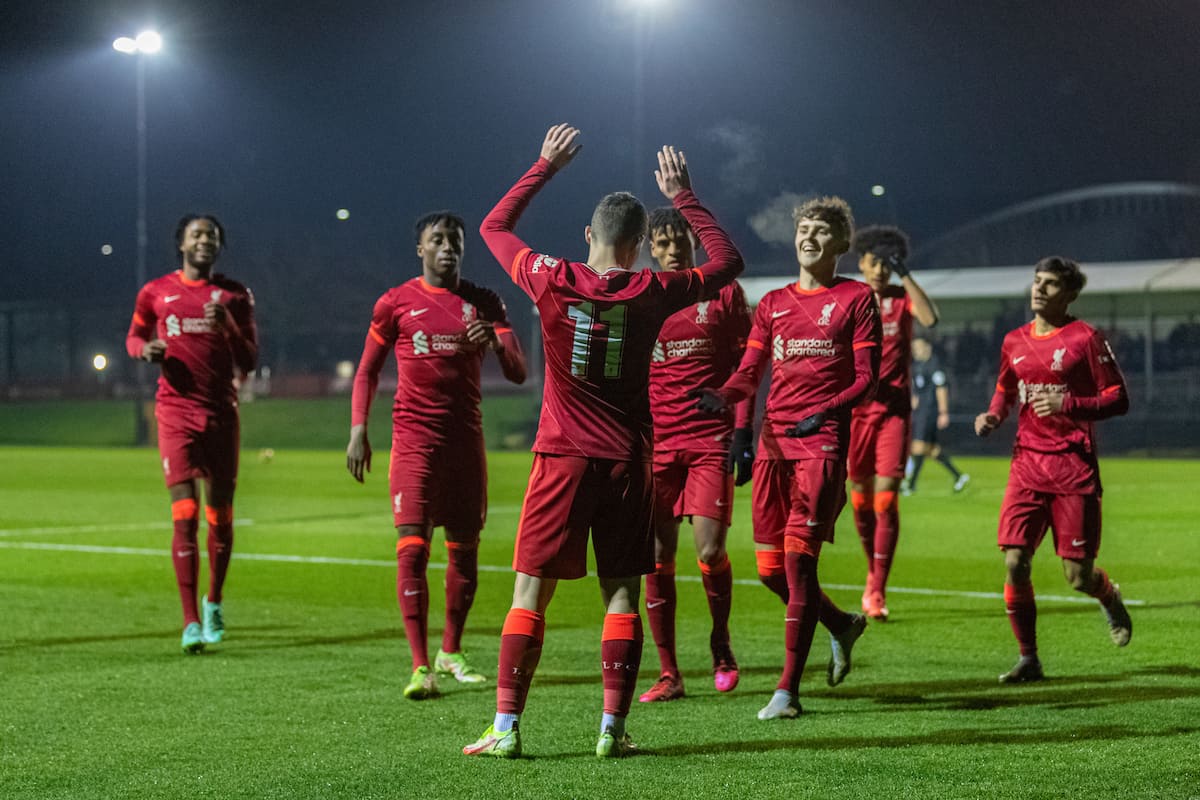 Marc Bridge-Wilkinson’s first under-18’s lineup of the season had a very youthful look to it, with seven 16-year-olds named in the starting XI.

Two of those were new signings Ben Doak and Trent Kone-Doherty. Winger Doak joined the Reds from Celtic, having already played twice for their first team last season. He started on the right side of the Reds’ attack, with Kone-Doherty on the opposite side.

Ranel Young was in the No. 10 position, with Lewis Koumas leading the line in an unfamiliar role, having played the majority of his academy football in midfield.

It took just five minutes for Doak to make an impact, as the Reds opened the scoring in slightly fortuitous circumstances. The Scotsman flew down the right-hand side before his shot deflected off a Middlesbrough defender and ended up in the back of the net.

Five minutes later, it was two. Koumas, son of former West Brom and Wigan midfielder Jason, had his first of the day after a clever run in behind the Middlesbrough defence and a cool finish past goalkeeper Nathan Fisher.

Doak had the game by the scruff of the neck. After 22 minutes, the pacy winger won and converted a penalty to make it three. You get the impression under-18s football may not be his level for too long!

Koumas completed a brace of his own on the half hour mark, after chasing down Niall Osborne’s hopeful ball and capitalising on a poor back-pass.

A minute later Boro pulled one back, as left-back Tylah Wallace-Ming, who was their bright spark throughout the first half, reduced the deficit to three.

The Reds weren’t done there, and shortly before half-time, Koumas completed his hat-trick, pouncing on another error in the Boro backline before rounding Fisher and making it 5-1. Not a bad first 45 minutes of the season for Bridge-Wilkinson’s young Reds!

Liverpool were equally dominant in the second half, with the front four of Doak, Young, Kone-Doherty and Koumas continuing to enjoy themselves.

However, it was defender Terence Miles who nearly scored Liverpool’s first of the half, heading Michael Laffey’s free-kick on to the bar.

The Reds’ sixth goal was truly special. After 61 minutes, Doak drove forward, showing the defender a clean pair of heels, before setting up Young inside the box. The under-18’s debutant could easily have unleashed a shot at goal himself, but instead had the awareness to lay the ball off to Koumas to tap in for his fourth.

With 20 minutes of normal time remaining, Bridge-Wilkinson decided Doak and Kone-Doherty’s work was done, with Keyrol Figueroa and Francis Gyimah replacing them.

Boro pulled another goal back in the latter stages, with an effort deflecting into the path of Ashley MacCarthy, who was on hand to finish past Fabian Mrozek.

6-2 was the final score, with Koumas finishing the game with four goals to his name. Bridge-Wilkinson’s decision to use the 16-year-old as a No. 9 well and truly paid off.

The victory marked an excellent start to the season for an under-18’s side full of some extremely exciting young attacking talent.